Less More
08 Jun 2022 10:34 #243628 by JAGtheman
Replace gear gear knob was created by JAGtheman
My current plastic gear knob on my Gen 3 needs replacing so I splashed out and bought me a fancy leather one, but now I have a problem.

How do I get the original gear knob off the gear stick?.

I have unscrewed the chromed ring below the knob exposing a threaded section that looks like it is split (?) but I see no grub screws. I tried twisting the knob but I am wary of breaking something on the gear level. Not a hint of movement.

Failing which, does anyone want a fancy leather gear knob?

Less More
08 Jun 2022 10:42 #243629 by DrRobin
Replied by DrRobin on topic Replace gear gear knob
I replaced mine about 18 months ago, from memory it was just screwed on, but must have had thread seal on it as it was quite tight to get moving.  The new one definately just screwed on.  I think I had to lower the stick cover and put a pair of grips on the gear stick.  The new knob didn't go all the way down so I put some chrome wrap over the gear stick. 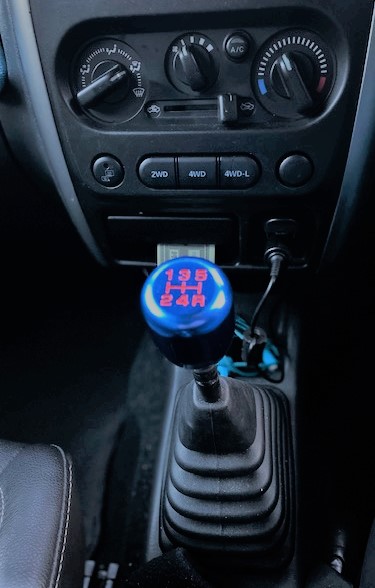 Less More
08 Jun 2022 21:44 #243634 by JAGtheman
Replied by JAGtheman on topic Replace gear gear knob
Thanks, I will try on the weekend with some form of grip on the knob itsself. I am wary though of damaging either the gear stick or where the gear stick enters the gearbox. Will try as the new gearknob is really nice (black leather with a smart gear layout on top, and surprisingly cheap..... so maybe it isnt leather who knows). If I am successful I will post a pix.
Julian
2008 Gen 3 Manual
Being completely revitalised

Less More
09 Jun 2022 13:21 #243641 by DrRobin
Replied by DrRobin on topic Replace gear gear knob
I thought I had seen somewhere that the knob is on tight and found it here on BigJimny