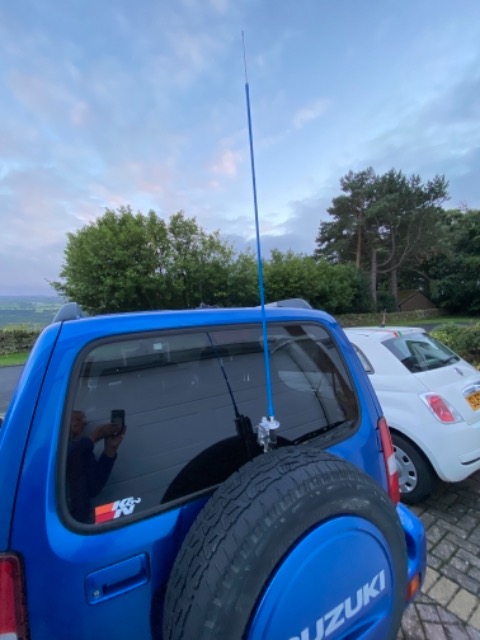 i also tuned it to the centre of the band, SWR is almost 1:1 in the centre rising to 2:1 at the UK & EU band edges 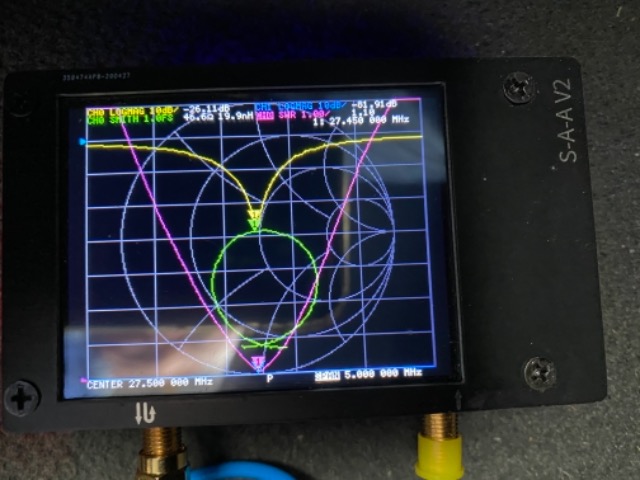 Just for completeness I also tuned the stinger, it was about 1.3:1 band centre but only about 1.6:1 at the band edges 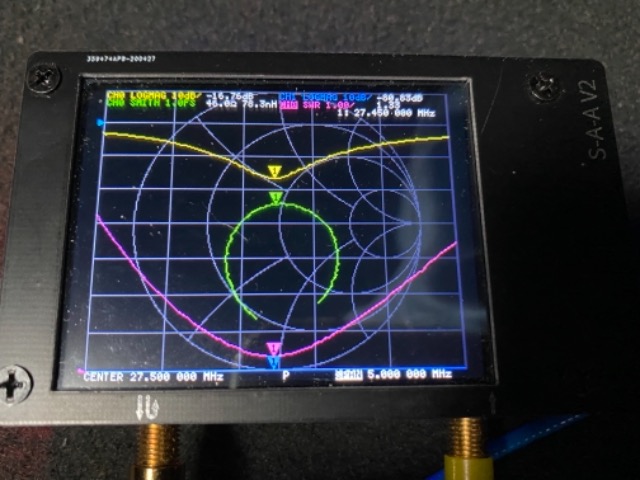 Less More
21 Sep 2022 07:34 - 21 Sep 2022 07:35 #245025 by Frosty
Replied by Frosty on topic The 'Ash-Tray' CB
I have just purchased a President Bill CB (yes, that is the real name!).
Bill is the same dimensions as your PNY and I, too, decided that the ashtray was the best position for security when off roading and driving the potholed streets of my city.
However, unless I position my ear almost on the handbrake, I cannot see the digits on the screen.
Before I reinvent the wheel, has anyone come up with a mod to up-angle the CB whilst still maintaining the ash tray location?
PS - I was advised President Bill over PNY due to overheat issues especially where there is no air flow. This is only an issue if you are spending a lot of time talking - but I didn’t want to replace the unit after a busy laning session. Price difference about +80% (currently £90 Sept ‘22) but, buy cheap - buy twice and all that!!
PPS - I LOVE your aerial location - definitely using that idea. I’ll probably fit a panel mount aerial connector to the door instead of just passing the cable through. In that way I can quick-change to a magmount if needed and if the external section of cable deteriorates / gets attacked by a low flying tree limb (or other such device) it is an easy replacement.
Last edit: 21 Sep 2022 07:35 by Frosty. Reason: Typo

Less More
21 Sep 2022 08:58 #245026 by DrRobin
Replied by DrRobin on topic The 'Ash-Tray' CB
I can't say that the PNI has got very warm yet, but then it's talk time has been very low. I do leave it on receive and it hasn't over-heated yet, so we will see how it goes. There seems to be a few makes in the same case layout, CRT appears to do one as well that looks identical.

I can just read the display if I tilt my head down a bit, or rather just to the side and down a bit, but to read it clearly, I have to put my glasses on as the contrast starts to go at that angle.

Mine is tilted up slightly, the ash tray replacement bracket pushes it upwards a little and the coax connector on the back hits the old ash tray fixing, meaning it site slightly proud, again this might make it easier to read.

As for the antenna cable, I wanted it hidden, that way it won't get snagged or pulled, hence burying it in the door and next to the wiring loom.

My short flexible Firestick type antenna is still too long, so I bought a swivel joint and when laning, just angle it back by about 45 degrees, then it does hit.

I have just bought a new handheld, it is coming with a mag mount and 45cm antenna with the same fixing, so I might swap to that and see how it goes.

Glad my install gave you some ideas.

Less More
21 Sep 2022 13:05 #245029 by DrRobin
Replied by DrRobin on topic The 'Ash-Tray' CB
The network analyser started life as an open source project called 'nanoVNA' and sold some 'official' ones through a website, but as they open sourced the design the far east copied it and sold them for a lot less, plus you could get one rather than siting on a waiting list.

I have two of these, an original 2.8" screen NanoVNA that might be a genuine one (up to 900MHz, but updated firmware to 1.5GHz) and the one pictured above that is a NanoVNA V2 (2.8" screen) up to 4GHz (most likely a copy, but works without fault).

Both work well but both screens get washed out in sunlight, so a sun shade is needed in anything other than a cloudy sky.

Before updating the text was large enough to read on the original but now I struggle a bit in bright light and sometimes use a magnifing glass. There is a PC connection that will scan more bandwidth and more data points, but refresh rate can get a little slow, handy for my multiple band HF dipole.

Less More
10 Oct 2022 08:10 #245358 by mlines
Replied by mlines on topic The 'Ash-Tray' CB
What a great little tool. it turns out I purchased the "wrong one", a version 1 rather than version 2. This was because of the confusion on Ebay/Amazon as to which model is which, I bought the small one with the best case included (most are bare board assemblies) but it turned out to be the older variant

However, it is more than suitable for my needs as I do not need more than 900Mhz of coverage and so far 101 points is not a limiting factor.

The second issue was getting the Windows App for viewing the output working. THe easily found application (google) seems to only work with the V2 models, I eventually found the V1 version which works fine.

I then connected it to the Jimny CB aerial and quickly tuned best SWR to the centre of the UK CB band, really nice and easy. Next to try my 2 metre  and 70cm set ups
Martin

Less More
10 Oct 2022 08:39 #245360 by Lambert
Replied by Lambert on topic The 'Ash-Tray' CB
Is this some kind of gate keeper cypher to get into one of the military intelligence units or something?
Temeraire (2018 quasar grey automatic)
One of the last 200ish of the gen3s, probably.

I didn't have any problems with DFU mode on a Windows 10 PC, but it was a couple of years ago and Microsoft is always breaking things with new releases.

I think the firmware update extends the original model to about 1,500MHz, something I was interested in as I have a aircraft spotter box running at 1090MHz and made my own multi-element dipole array.

It also does Time Domain which can be used to test a coax cable, if you put in the Velocity Factor of the cable, it will tell you if there is a break or short circuit and the distance down the cable.

The only reason for me buying the second version was to cover 2.45GHz, I thought I might use it at work, but haven't made much use of it, just tested a few antennas and power splitters.

Pity we didn't find out before the meet up, I could have brought my older model for you to have a play with. Still at least you will be able to fix everyone's CB at Aldermarston.

I also have one of these www.tinysa.org/wiki/ 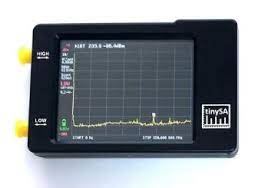 Great for checking transmissions of radio kit, I can see that will be on you Xmas list.

Lambert wrote:
Is this some kind of gate keeper cypher to get into one of the military intelligence units or something?