× Are you building a Mud Monster or a Pavement Princess??
If so you can have your own thread in this section.
This section on other websites has led to arguments and contention. People are posting pictures of their pride and joy and therefore CONSTRUCTIVE comments only please!

mlines wrote: How about some storage boxes fitted over the wheel arch??? 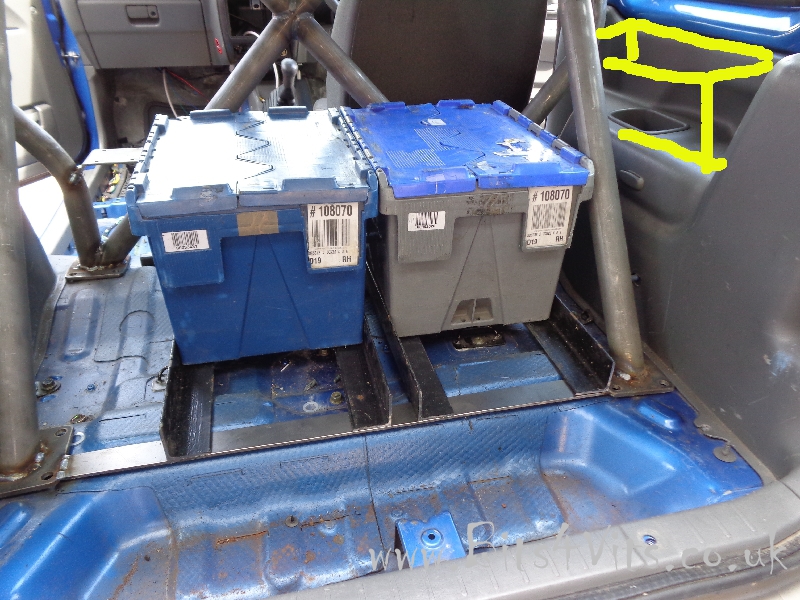 The topic has been locked.

Almost finished the switch panel (still needs wiring yet though!) added another switch for the inside rear worklight on the rollhoop... and have also ordered two "push-to-make" switches, one blue one for a 'flash' button for the front LED lightbar (rather than having to flick the aircraft switch on and off), and one red one for a couple of louder horns (whilst still retaining the Jimny's cute "peep peep" horn

Mini CB has arrived to sit in the ashtray's space too...

Then got the box swapped in and under the car -

Then, to my amazement... Errr, I shouldn't have expected any less, but, I was still amazed... when selecting two-wheel-drive-low (which I assumed to be a workaround / bodge to merely disconnect the front propshaft)... in actual effect the "4WD" light goes off AND the front vacuum-operated free wheeling hubs actually disengage too... I was surprised to find this out during testing, I assumed the front prop would be 'dis-connected' from drive in the transfer box, but I didn't expect that the hubs would disengage too... this is more than I could of hoped for... my goal is to have a vehicle that has the utmost road driving manners (that a Jimny can have

), so although it's lifted, by virtue of the Redacted Rocklobster transfer-box and the averagely sized 235/75/15 tyres, it should have a normal driving style on the road to get to / between the greenlanes, until I get to go offroad, and then with the flick of a couple of switches (compressor and then rear ARB) the rear axle will lock up, and the selection of four-wheel-drive (high or low) through the transfer box lever will then also activate the vacuum hubs which will connect the front Calmini LSD* (robbed out of my old Vitara) and should, with the aid of the super-low crawler "Rockwatt Rocklobster" box, give the little trucklet fantastic traction off-road, from the driver's seat (waterproof bucket) without having to get out and switch free-wheel-hubs in and out!

* This (LSD) took a step closer too, as Rob Storr (another engineering god!) emailed me to say the 26 spline front shafts and heavy duty CVs were ready, so I've paid for them and they'll be winging their way over soon, to fit in the LSD in the front axle... eventually, Phase Two that... with the rear winch... Phase One is to get it ready enough to go 'laning in the Lake District again the third Sunday in July with the rest of the guys... all in Jimnys!

Awesome... just needs the props bolting in now then... only I discovered the new-old-stock one I got off eBay is a 410 smaller splined at the gearbox end than a Samurai one, and so won't fit... To the rescue once again, Redacted has stuck one in the post to me... Superstar!

Last edit: 26 Jun 2014 10:54 by Bits4Vits.
The topic has been locked.
Less More
26 Jun 2014 16:37 #118689 by Bits4Vits
Replied by Bits4Vits on topic Dave's (Bits4Vits) Jimny 'laner Build...
With the ORA recently announcing they are stopping making Jimny parts, I thought it pertinent to buy the last-but-one set of their heavy duty rear axle to radius arm mounts from the BigJimny store... I don't need them yet, but best to have a set sat on the shelf in the garage for if and when I do...! As the stock ones look very thin!

We're just simply stopping listing Jimny products online as off-the shelf parts, as we are finding that keeping up with batch production as well as running the other side of our business is very hard to manage and doesn't really work together very efficiently.

As many of you will already know we started out in business many years ago specializing primarily in Suzuki off-road parts & accessories, as well as building a vast array of competition off-road vehicles.

After many years of running both the fabrication & Suzuki parts manufacturing in conjunction with each other, sadly the day has come where we feel we need to chose one direction to fully focus our efforts on.

It is with a very heavy heart that we announce will no longer be manufacturing Suzuki specific off-road parts, as we have chosen to focus our business in the builder/fabrication direction of the industry.

Here @ O.R.A we have in house CAD designers, fully equipped workshop facilities with experienced fabricators that are able to build anything to suit your requirements, and because we are in complete control of our builds under one roof this also gives us great turn-around times and the best customer service and product you will find.

We have a reasonable amount of remaining Suzuki Jimny parts in stock, these are now being offered at discounted prices. But once stock is gone they are gone, so don't miss out!

We would also be happy to hear from any persons who may be interested in purchasing our Suzuki Jimny parts business as a going concern. Genuine inquiries only please, we will not sell individual drawings/designs. this is an offer for the whole Jimny parts manufacturing business only.

I must have misunderstood the above then?

The topic has been locked.
26 Jun 2014 18:00 #118700 by O.R.A
Replied by O.R.A on topic Dave's (Bits4Vits) Jimny 'laner Build...
Nope you read it correctly, "but" as with many of our older designs and products we have always been happy to manufacture special requests to order.

And a parcel arrived this morning!

Rob Storr! Wonder what it is then... lol

Need 26 spline shafts to be able to shoehorn my Calmini LSD (Limited Slip Diff) into the front axle casing...

I'm hoping that the vacuum operated hubs will still work?

looks like Rob was up all night wrapping it up

looks like Rob was up all night wrapping it up

He must have shares in a brown parcel tape factory too!

I should explain, I work 6am to 9pm running a convenience store, Post Office and Bits4Vits... so I do wander off in the daytime, as I work the mornings and the evenings, and the wife works daytime while our daughters are in school... I do do some actual work now and again, long hours, but it works for me as I get plenty of time for my own hobby...

Ok, anyway, after unloading one of our bi-weekly lorry deliveries this morning, I rang the powdercoaters to see if the hoop was ready...

They didn't let me down!

The ORA-made hoop is back, so time to squeeze it back into the Jimny... carefully!

Tyre strap on, a collaboration between Luke harnesses and the OffRoad Armoury

Leaving full visability out of the back window

Back to the build next week now, this Sunday we're out greenlaning again... Four Jimnys, and... probably for the last time... the "Zukhini" Vitara, next trip I hope it'll be an all Jimny lineup, and mine "Sonic" will be out with the rest of our little group!
Last edit: 27 Jun 2014 15:54 by Bits4Vits.
The topic has been locked.
Time to create page: 0.225 seconds
Powered by Kunena Forum