You will have seen in my other articles that I have fitted a Rocklobster Transfer Box using an Offroad Armory mounting kit. My kit was an early production model and I had problems with clearance between the transmission tunnel and during testing the other week we had a "Tink Tink Tink" noise which turned out to be a balance weight hitting the gearbox remote mechanism.

Rob, from Off-Road Armory has contacted me to explain that the kit now comes with new mounts to replace the standard Jimny ones that were originally re-used in the early versions of the mount kit....

The new mounts are made of the same material as Polybush suspension parts. They are slightly smaller that the standard rubbers meaning the Transfer Box sits lower stopping the propshaft hitting the remote mechanism. Therefore this has cured the problems and I understand all new kits will have these mounts included.

The only side effect I have noticed is that the Transfer Box noise inside the car has increased quite a lot. I assume that the stiffness that is inherent in the Polybush design transmits more mechanical noise from the Transfer Box to the Chassis, whilst the soft standard bushes absorb a lot of the noise. 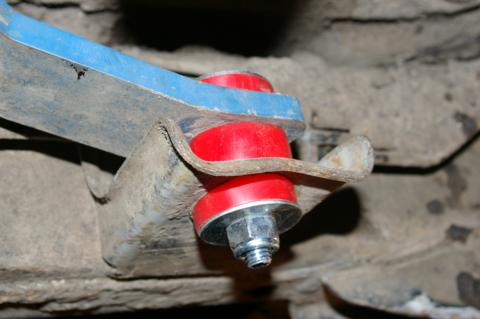 And before you all comment - yes I have taken the bolt back out and turned it around since I took the picture as I realised that the nut and the end of the bolt protrude down and will hit the ground when off-roading. By putting it the other way up then only the relatively small head of the bolt protrudes which is better.

I have therefore created a new version of my fitting guide to reflect that you get new mounts with the kit.

More posts from author
Friday, 12 June 2020 Fitting a lift kit to a Gen4 Jimny
Friday, 12 June 2020 Modifications and Upgrades to our Gen4 Jimny
Wednesday, 26 February 2020 Baofeng DM-9HX DMR
We use cookies to give you the best online experience. Please let us know if you agree to all of these cookies. Accepting the Cookies also accepts the Disclaimers for the website.
View GDPR policy Accept