In terms of comfort and dry road holding, I’d really struggle to know they were any different from the standard Bridgestones. I also don’t think they are any noisier either. Although I can’t be certain on this. I do think there is more noise, but dipping the clutch removes this. So, my current thinking is the new transfer box is slightly louder than the old one.

The 215’s are only marginally taller by the numbers. I was expecting to see the speedo read slightly differently as a result. But according to GPS it appears to be almost identical to with the old tyres.

Not really had any chance to try them in the dirt yet. I did run down a Byway. But it was dry and grippy and didn’t even require 4wd. So more to report in this in due course.

The only real difference is rotating mass. Having lifted the new tyres in and out of the vehicle on the way to the tyre shop. And lifting the old ones back in. The AT’s are a more hefty and heavier tyre. On the vehicle you can feel this in the performance. I’m not saying it is slow now. But certainly slightly less peppy. This has surprised me a bit. And all I can say is, I’m glad I didn’t go for a set of 235’s. They would have been taller and heavier again. So must impact the performance even more so.
My 2019 Chiffon Ivory JB74 SZ5 - blog/mods/build thread -let the adventure begin 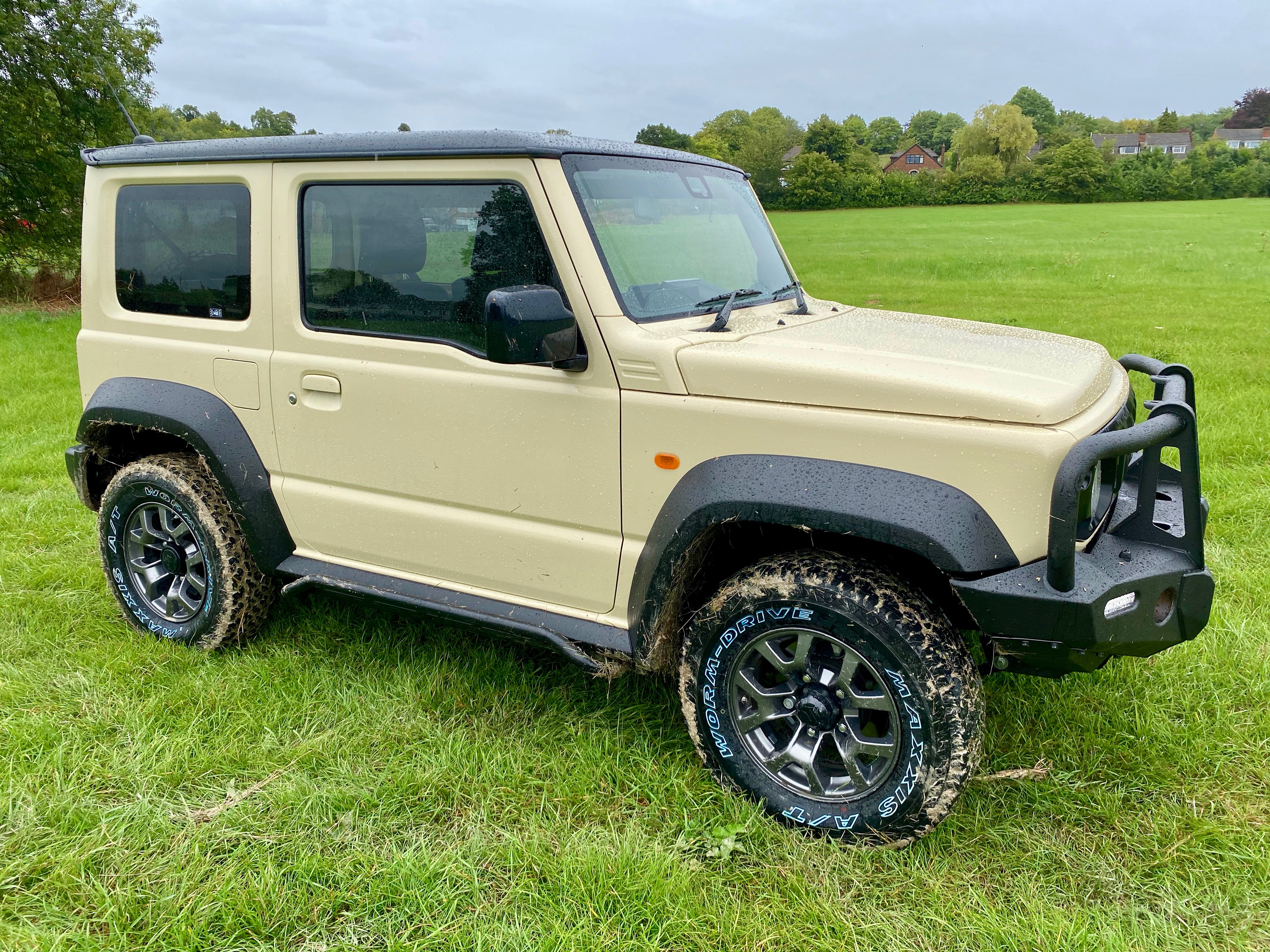 Well, we had some heavy rain here yesterday, so I took the opportunity to try the new Maxxis Wormdrive tyres out.

Dry weather handling seems very good. For the most part they seem no worse on road than the original road biased Bridgestone Duelers. There might be slightly more noise at 60mph+ speeds, but it really is hardly any difference.

No wobble or vibrations either.

General handing is very good. Although when you push on having some fun in the bends, you can feel it moving about on the lugs. Nothing nasty, just a little more, active, shall we say...

Wet roads I'd have to report much the same. There was some standing water and heavy run off yesterday. No hint of aquaplaning and they held the road absolutely fine. Even when adding a bit more vigour with the steering wheel and accelerator pedal.

Really the only downside is the blunted performance. I know the Jimny isn't built for speed, but it always felt zippy and peppy before hand. These new tyres are less than 1/2" taller (11mm by the specs). And only marginally wider at 215 section vs 195s. They do have bigger lugs, so more drag and the weight of them as mentioned previously is quite a bit more than the standard road tyres.

Sadly it feels as though the Jimny is down 10% on power, it is that noticeable. How guys are running 235/75R16's with stock gearing I'm not certain. I have a couple of ideas in the pipework to try and recoup the peppiness of the engine. But that might be for next month.

MPG is down slightly too (by 1mpg), but I expected this. Although to be fair I have been driving it harder (due to feeling slower) and it has done more shorter journeys than normal and more off road use.

So now to the point most will be interested in. How did they do in the mud?

The soil where I was driving is very chalky and gets extremely slick when wet, as well as rather cloggy. That tends not to clear well in almost all mud terrains. 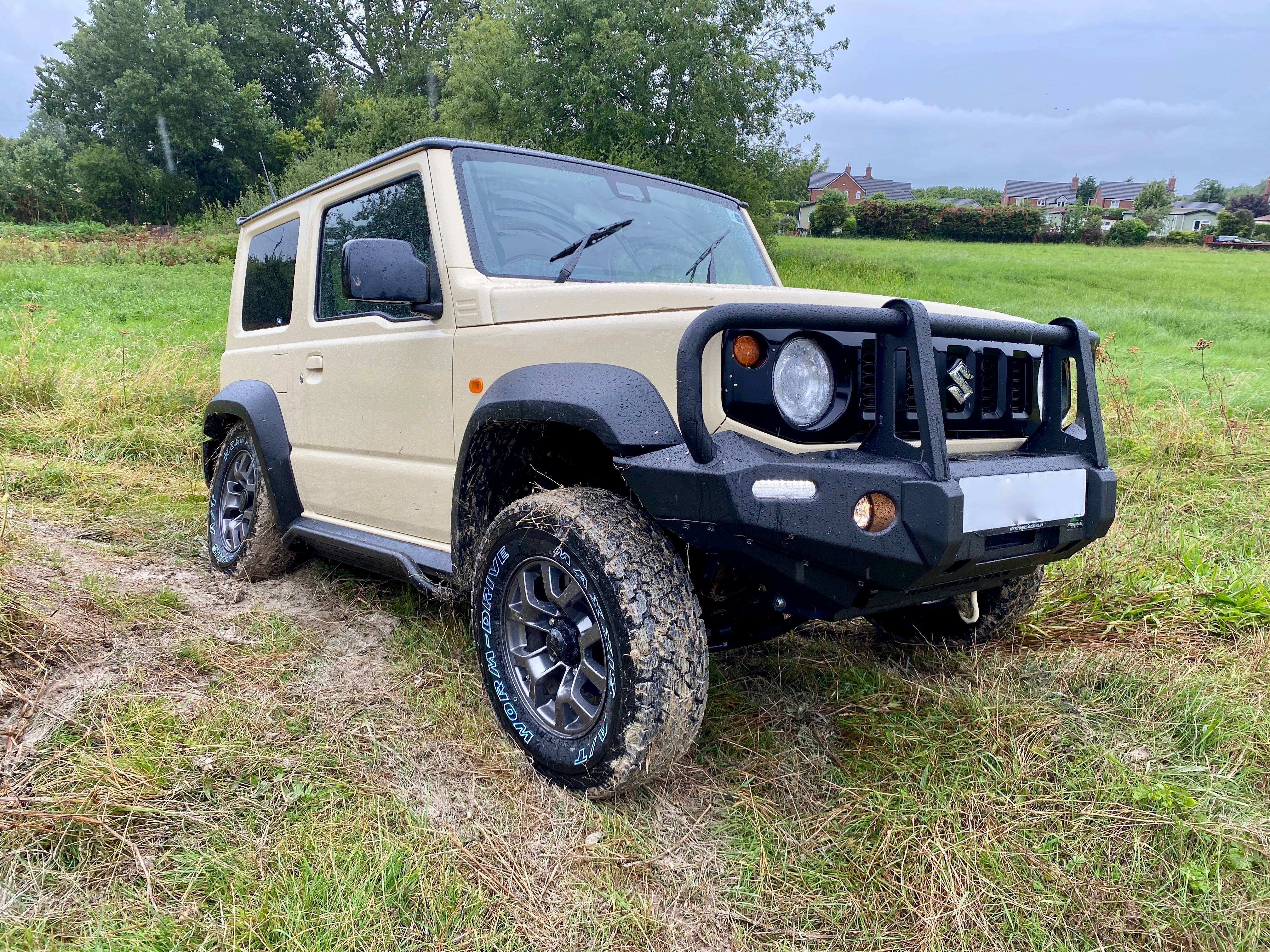 Now the Jimny doesn't flex like my Land Rover does, but not only could I get out (and nearly fell over, it was that slippery here). But thanks to the wonders of 4 wheel traction control, was able to pull aways and drive through the obstacle without needing to rollback or get a run up. I'm pretty sure the stock tyres would not haven enabled this. The Maxxis Wormdrive tyres really worked well with the TCS, giving huge ability. 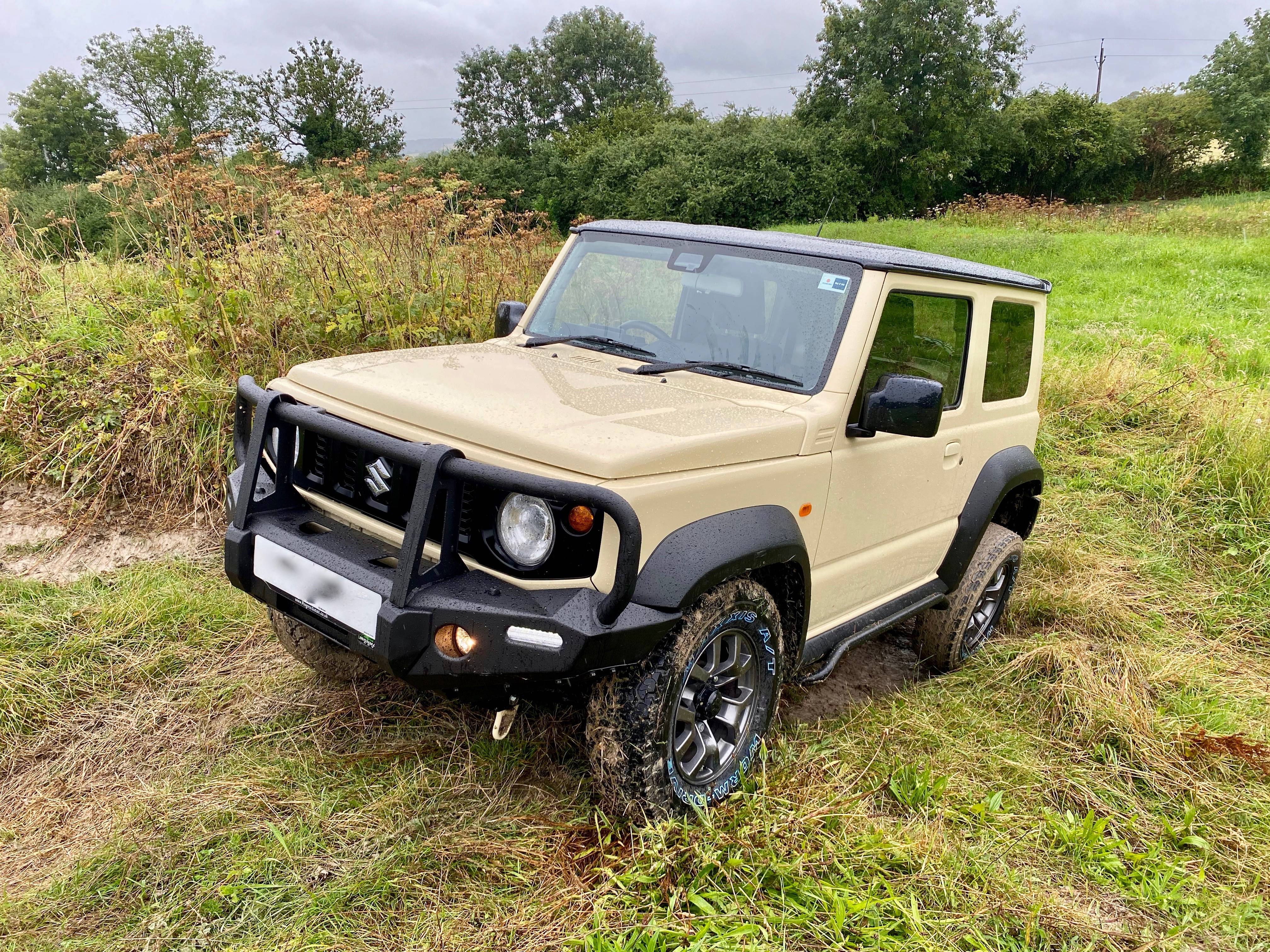 In this picture you can see how the mud is and how it clings to the tyre: 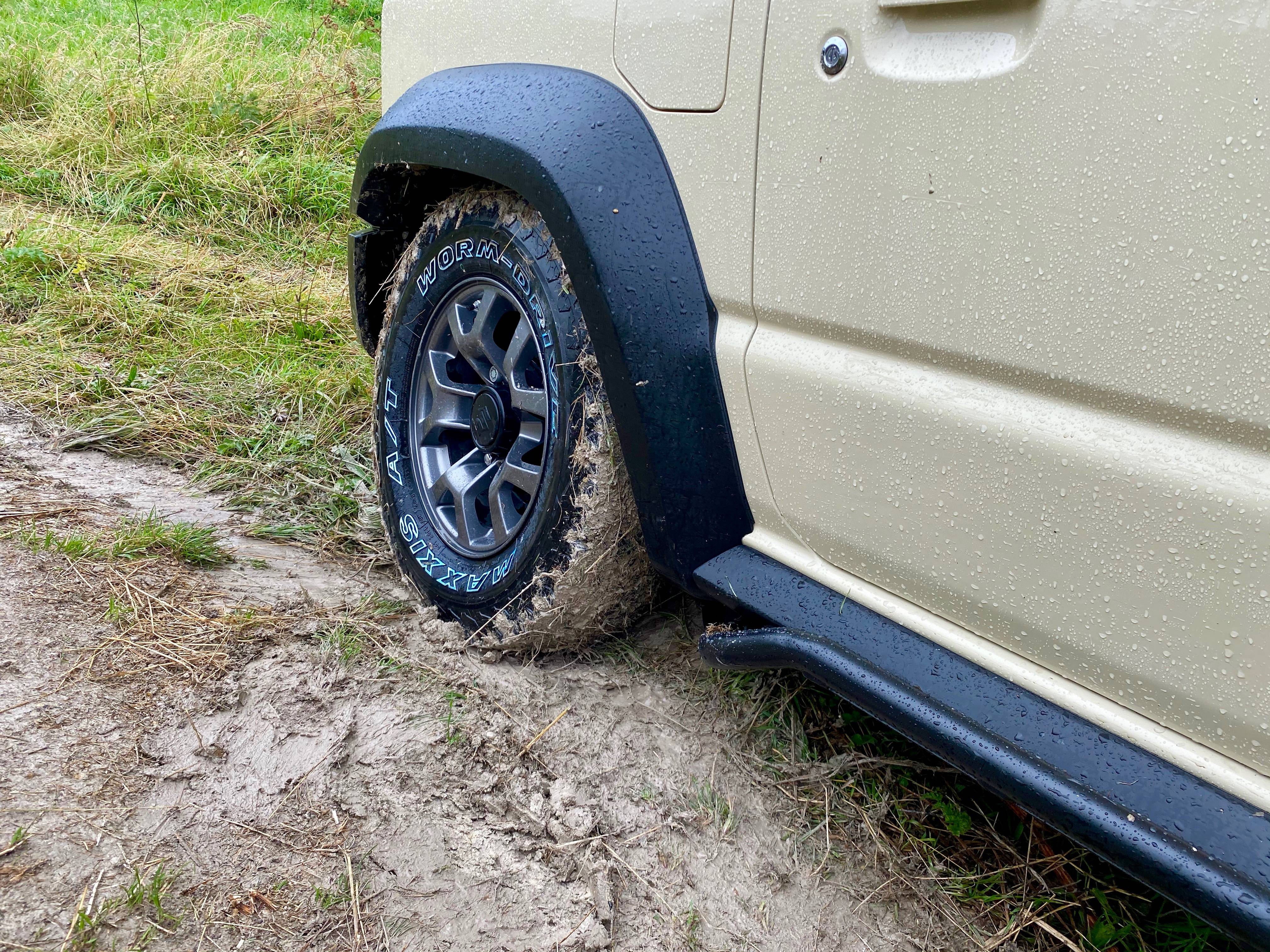 Testing the suspension flex out. 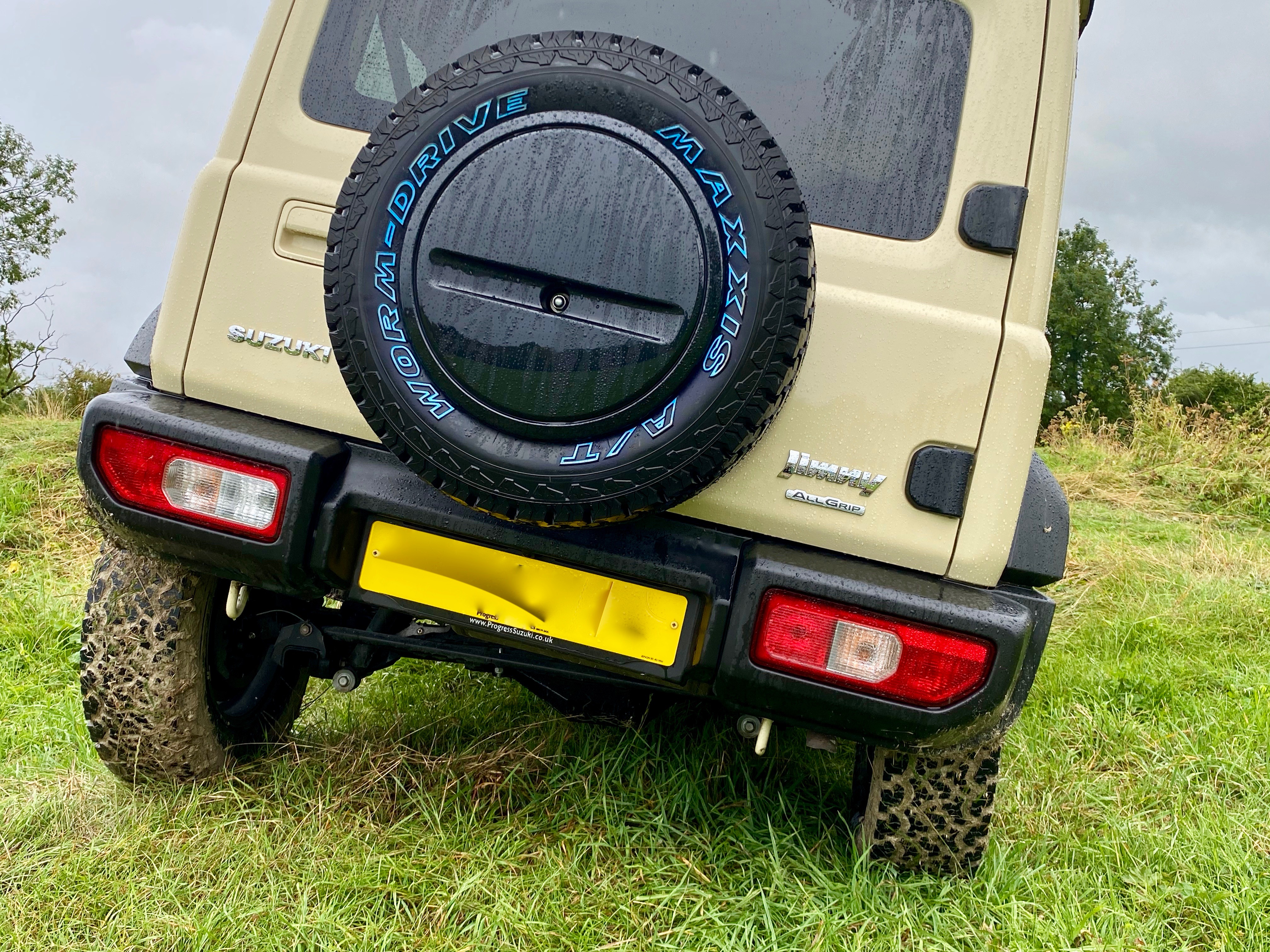 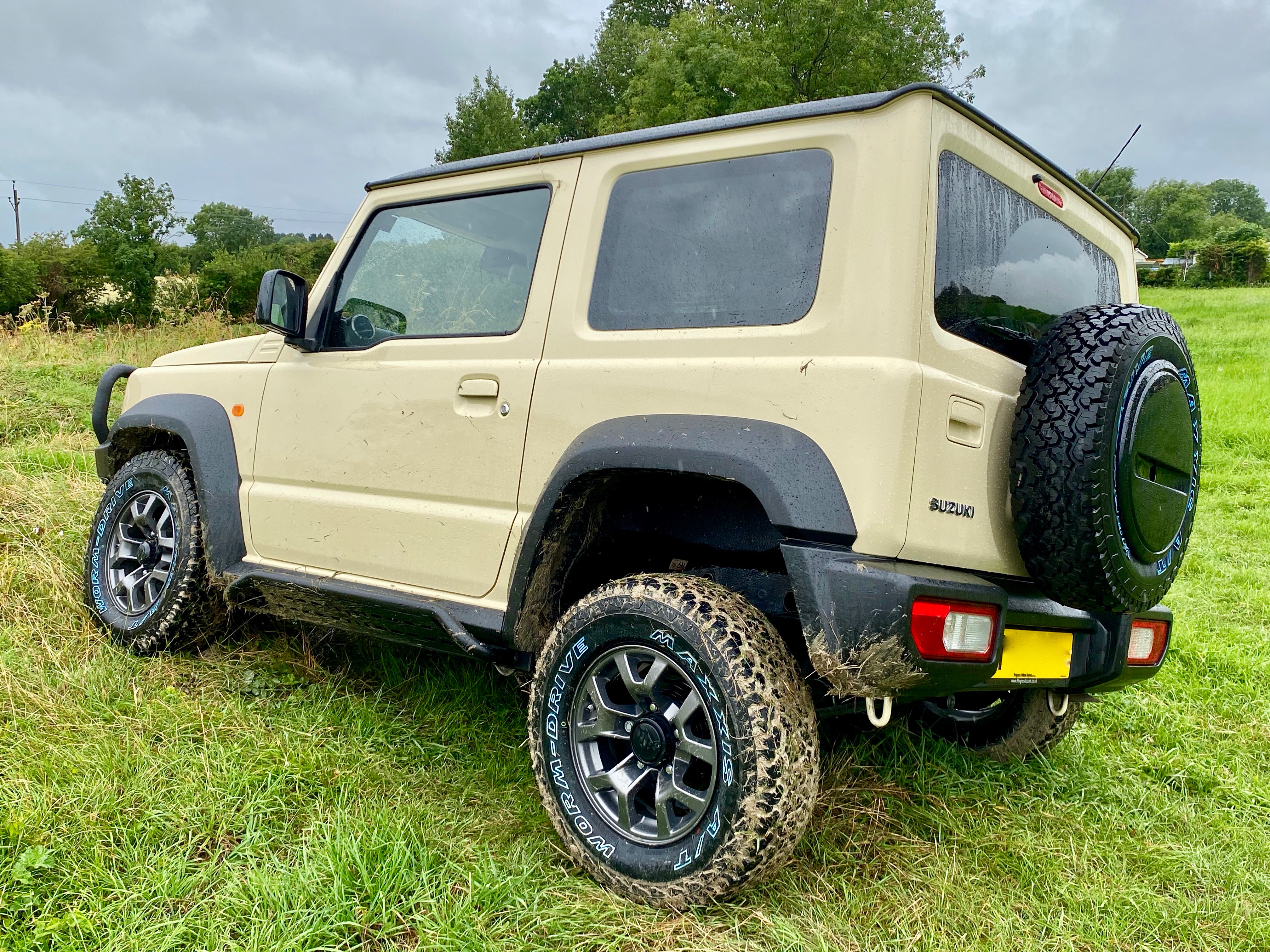 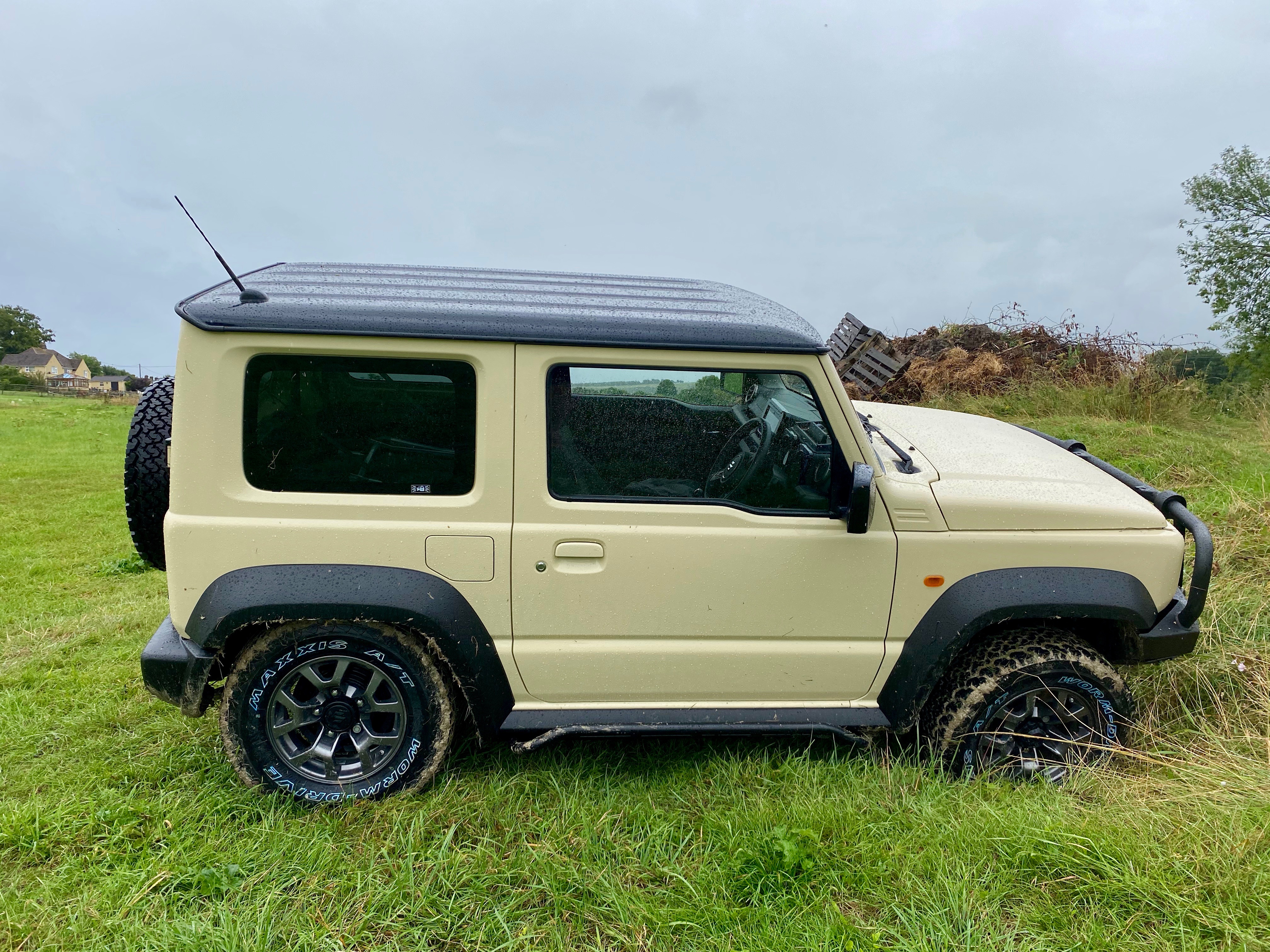 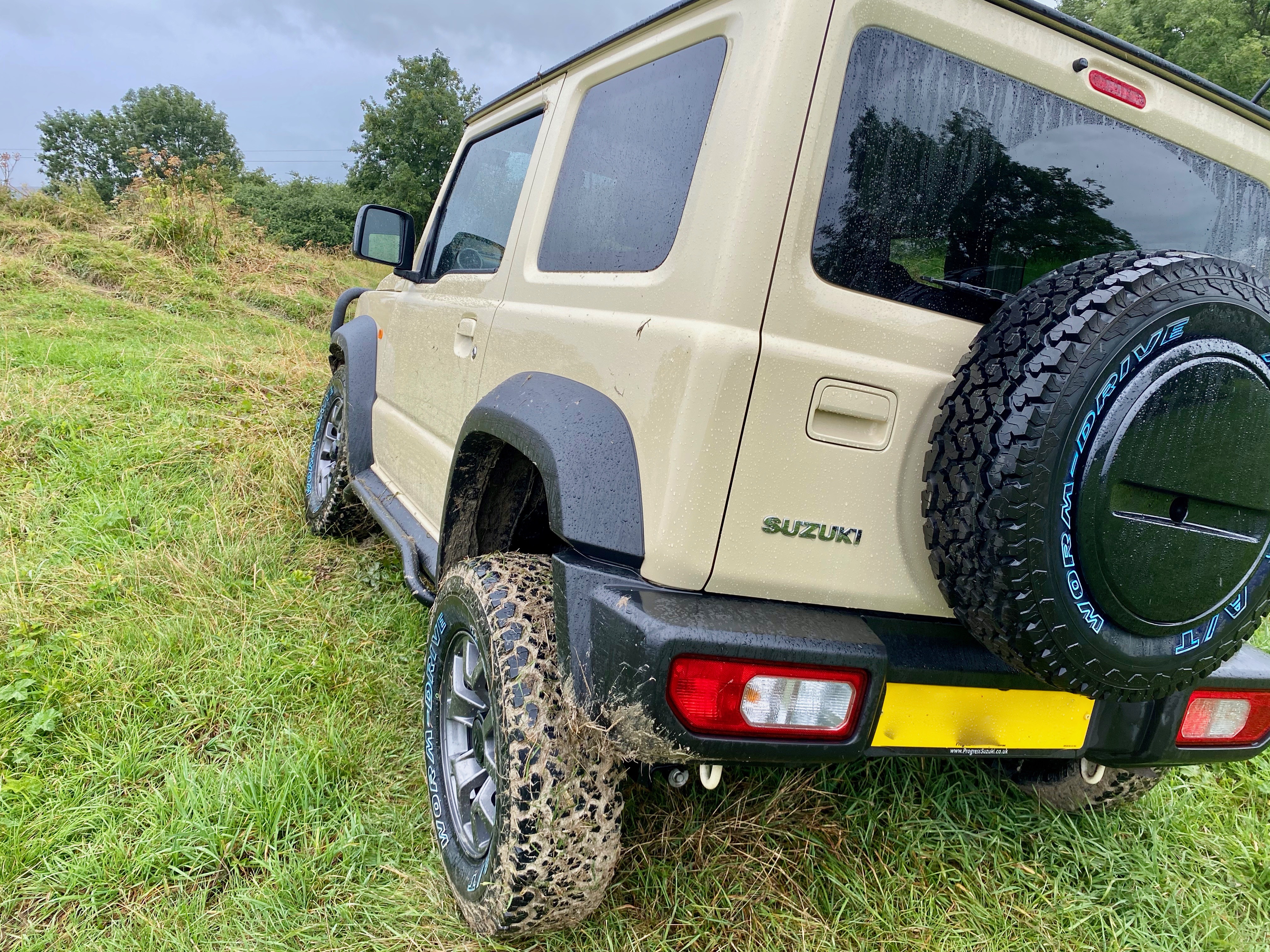 Despite the mud persisting on sticking to the tyre, you can see the central lugs are still protruding, which is probably why they worked so well. Think they have 12mm or so of tread. 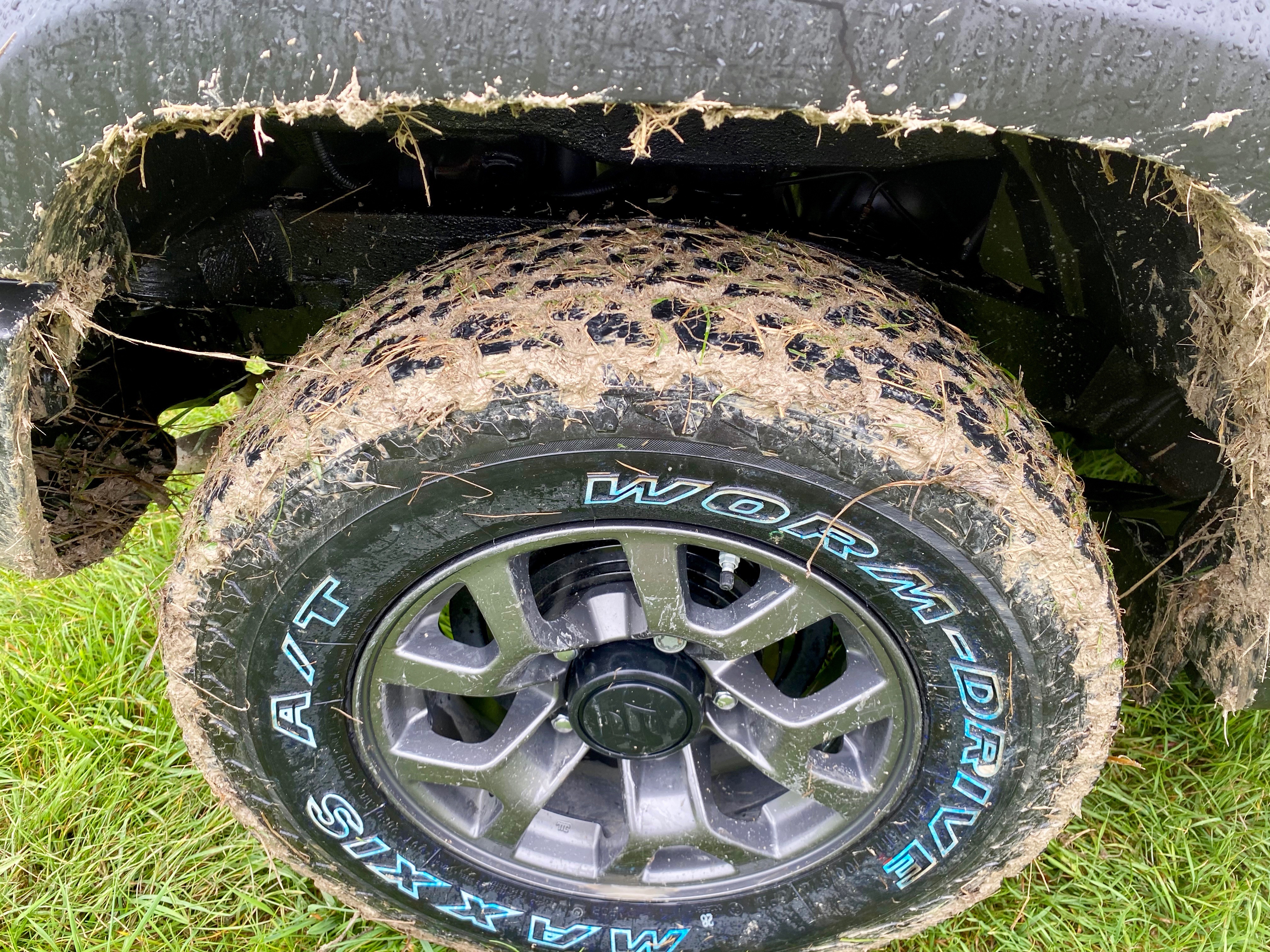 The fronts cleared a little better. 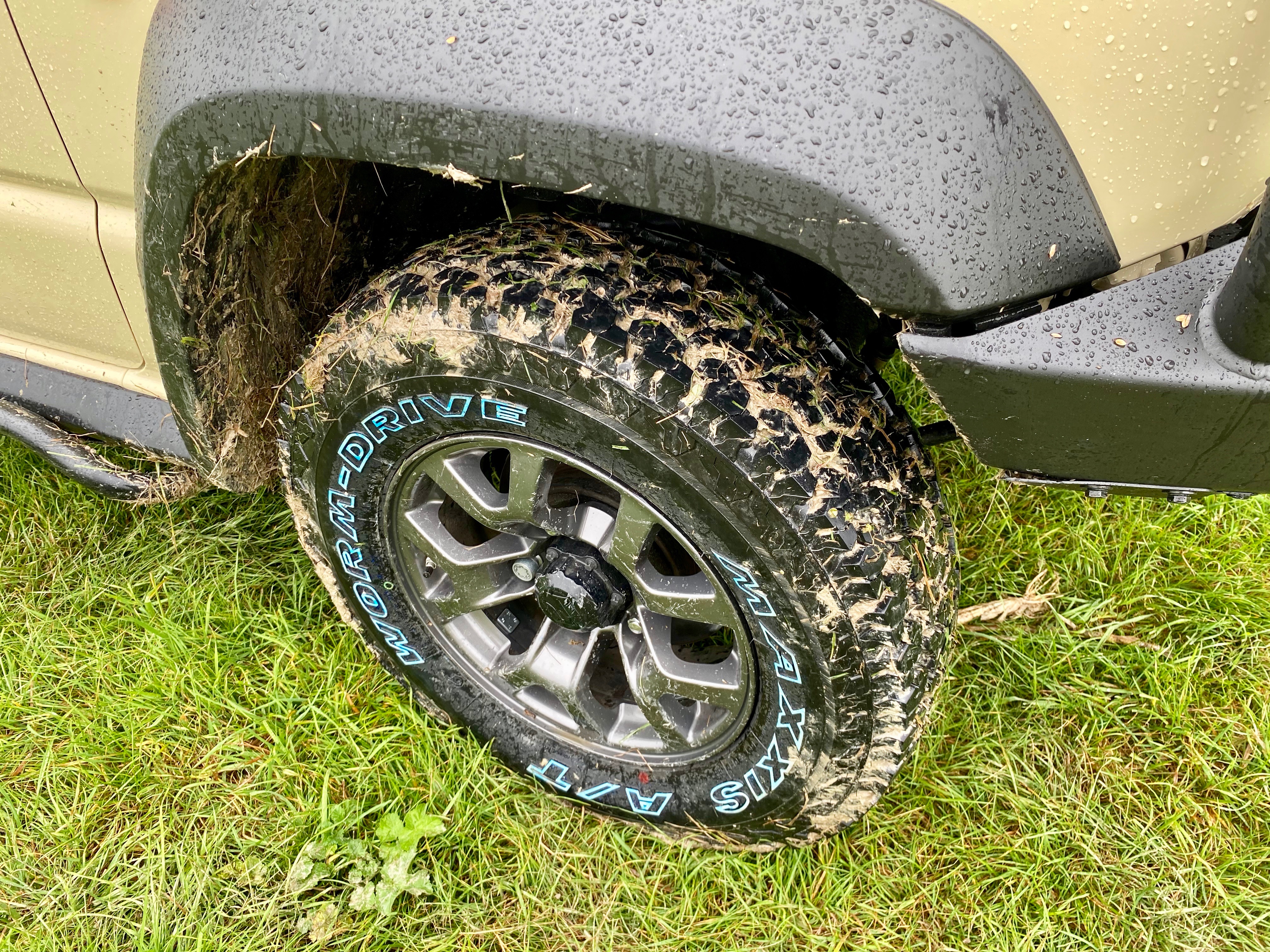 So with mud down the sides, I think I'll be looking at some mud flaps next. 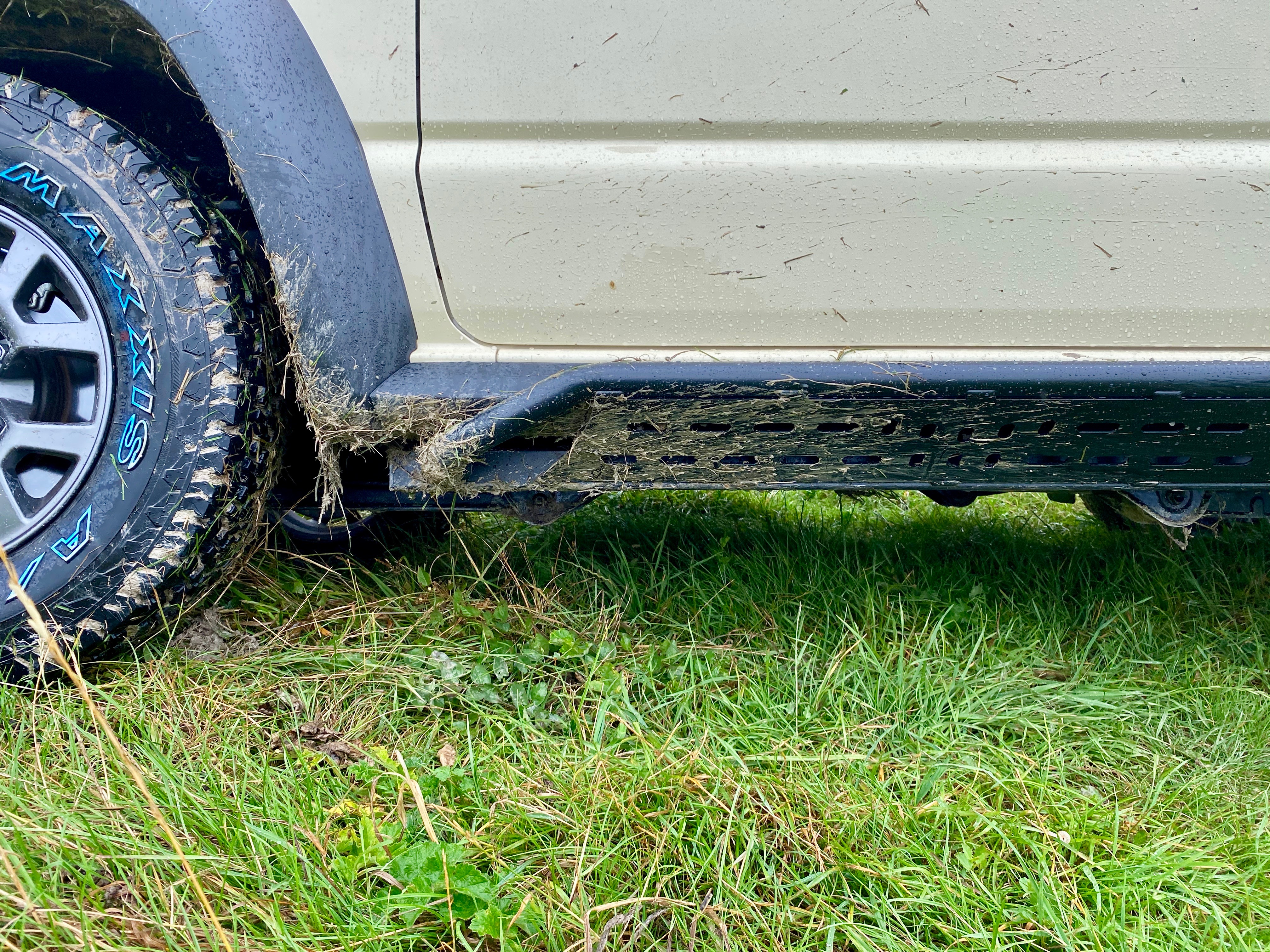 And a few mud traps to keep an eye on and make sure the mud doesn't build up. 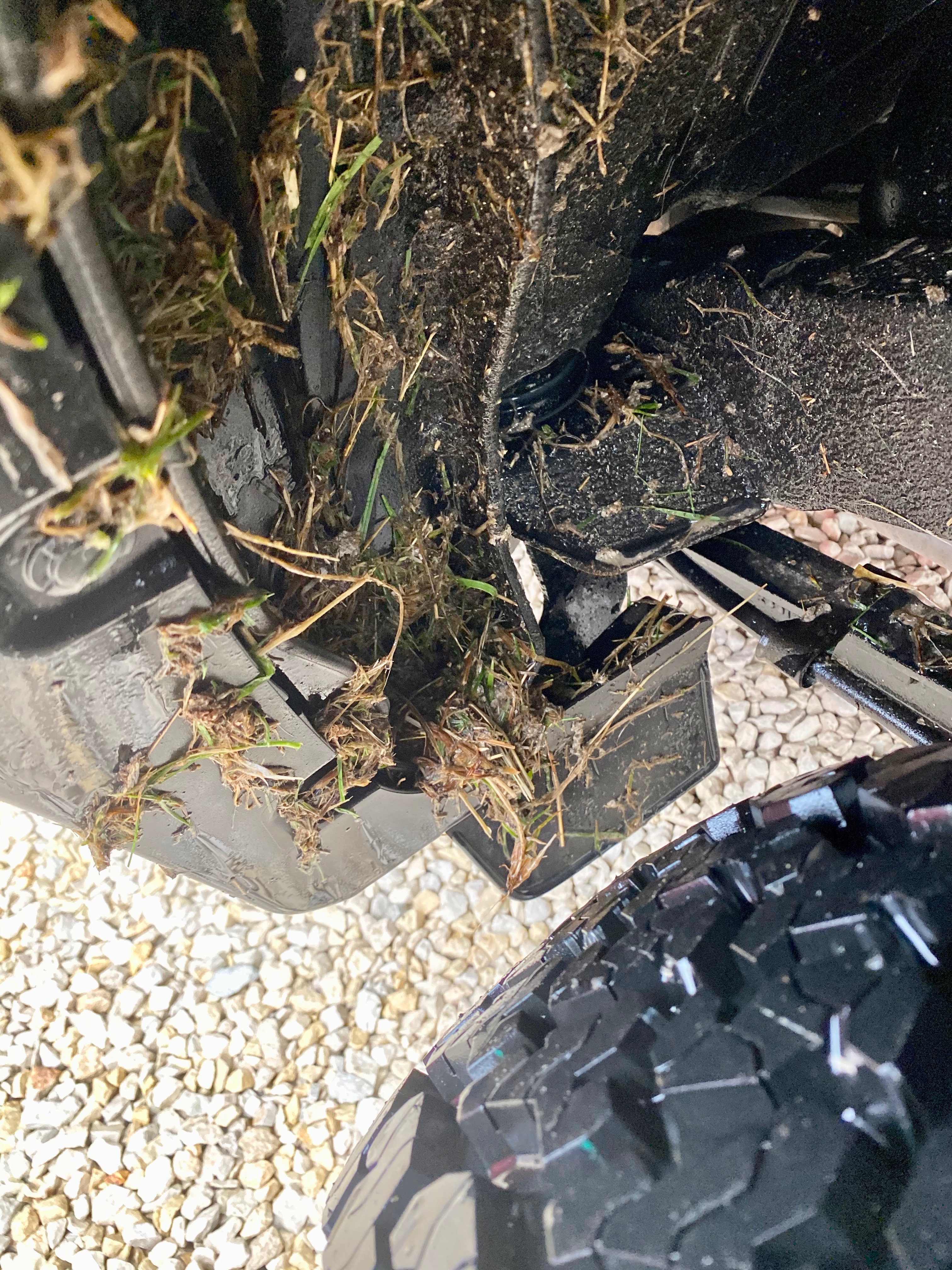 Overall I'm pleased with my decision of tyres thus far. 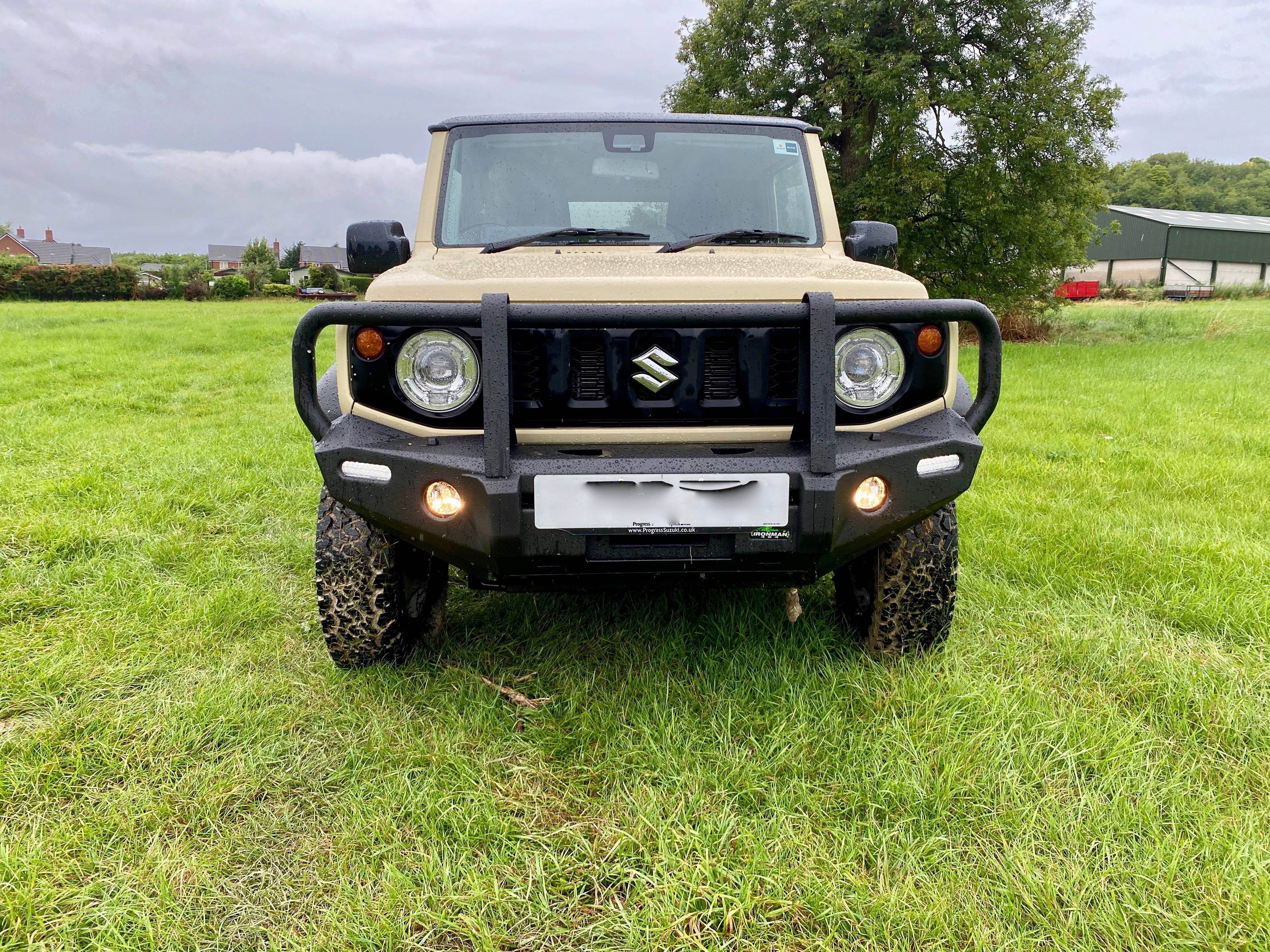 I just read your previous posts regarding the tyres taking the zip out the engine. Lol .... just wait until you fit the tranfer plate, diff gaurds, fuel filter gaurd, shocknplates and radial arms gaurds

Less More
27 Jul 2020 08:54 #225729 by lookonimages
Replied by lookonimages on topic Re:My 2019 Chiffon Ivory JB74 SZ5 - blog/mods/build thread -let the adventure begin
Looked at your pics it confirms open the jimny back bumper is behind the wheels. The whole lights / wiring is open. Saw that week ago when I took off the back bumper for reverse camera install.

Are you going to add some sort of wheel well/ rubber lining to close that off.

I am really tempted to make a plan on my jimny.

Sent from my SM-A505F using Tapatalk 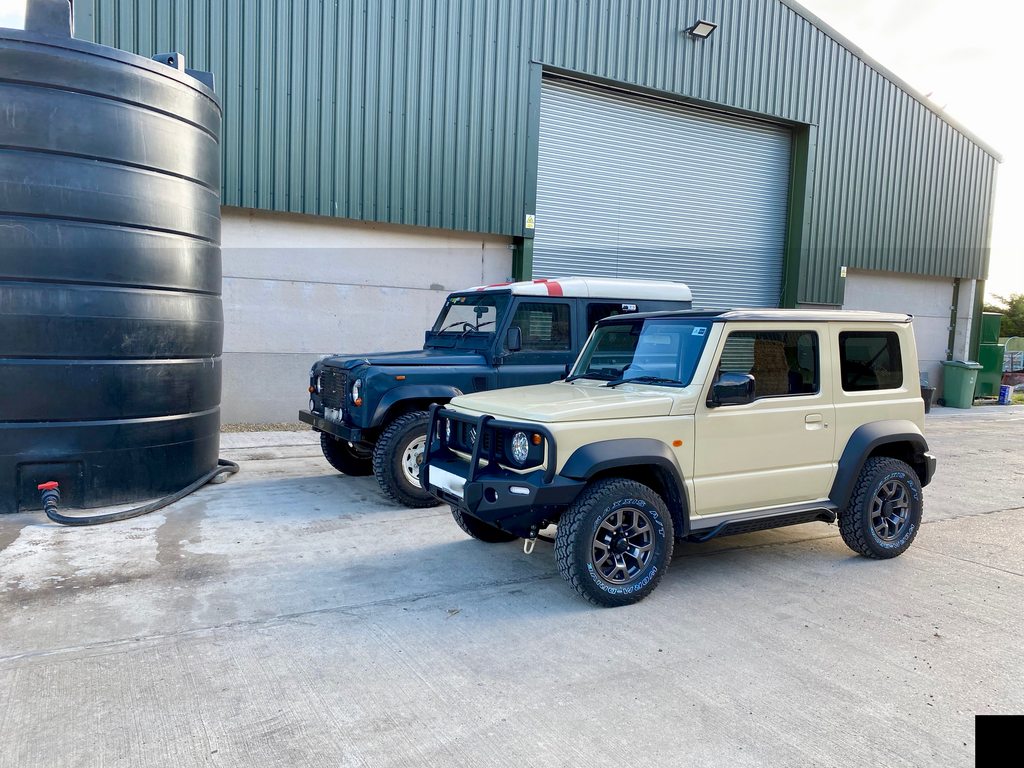 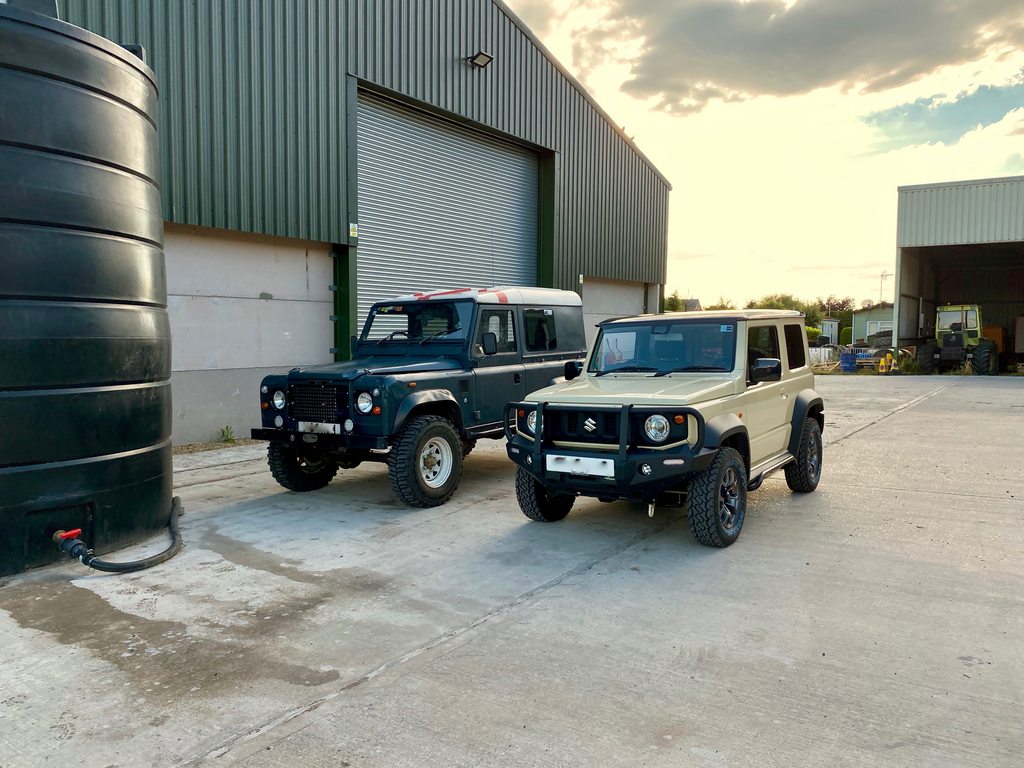 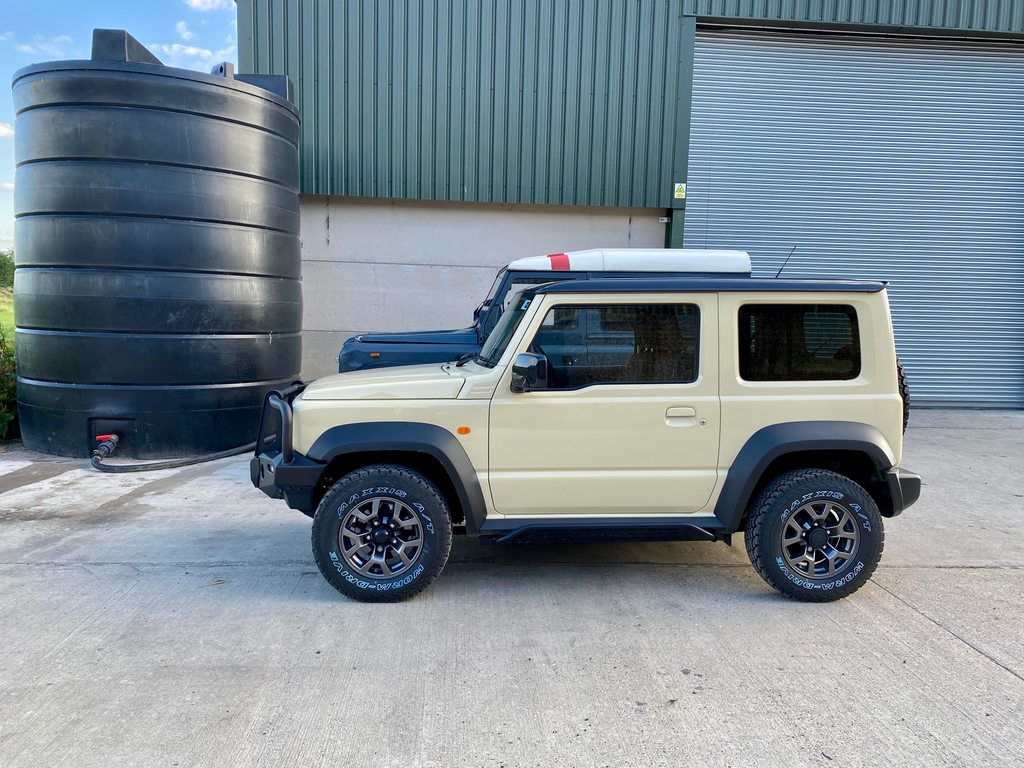 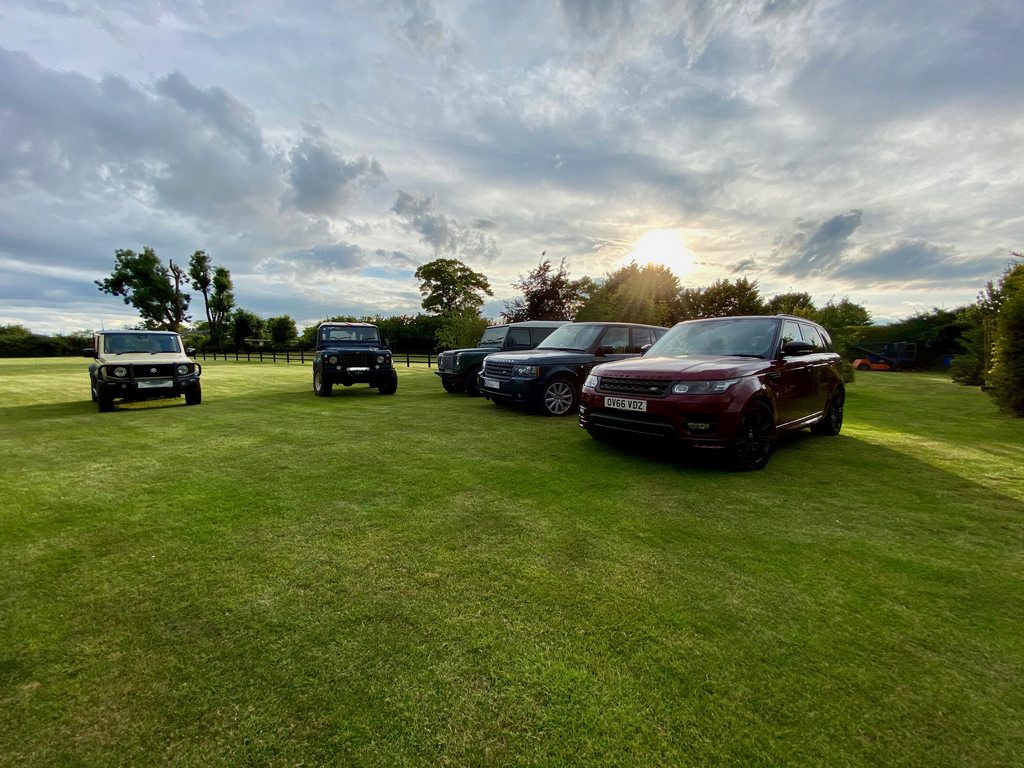 Sent from my SM-A505F using Tapatalk

Less More
01 Aug 2020 17:29 #225948 by treps
Replied by treps on topic My JB74 SZ5 - blog/mods/build thread
Great thread. Thank you for taking the time to post the mods and upgrades.
I saw the rocksliders mentioned in another thread. Order placed!

Nothing too difficult, just a bit of fun really. The lane didn't look like it had been driven in a while, although I could see some recent wheel markings from what was probably a Quad bike.

It was well signed as a By-way however.

A little overgrown in places, but thankfully nothing scratchy or damaging. 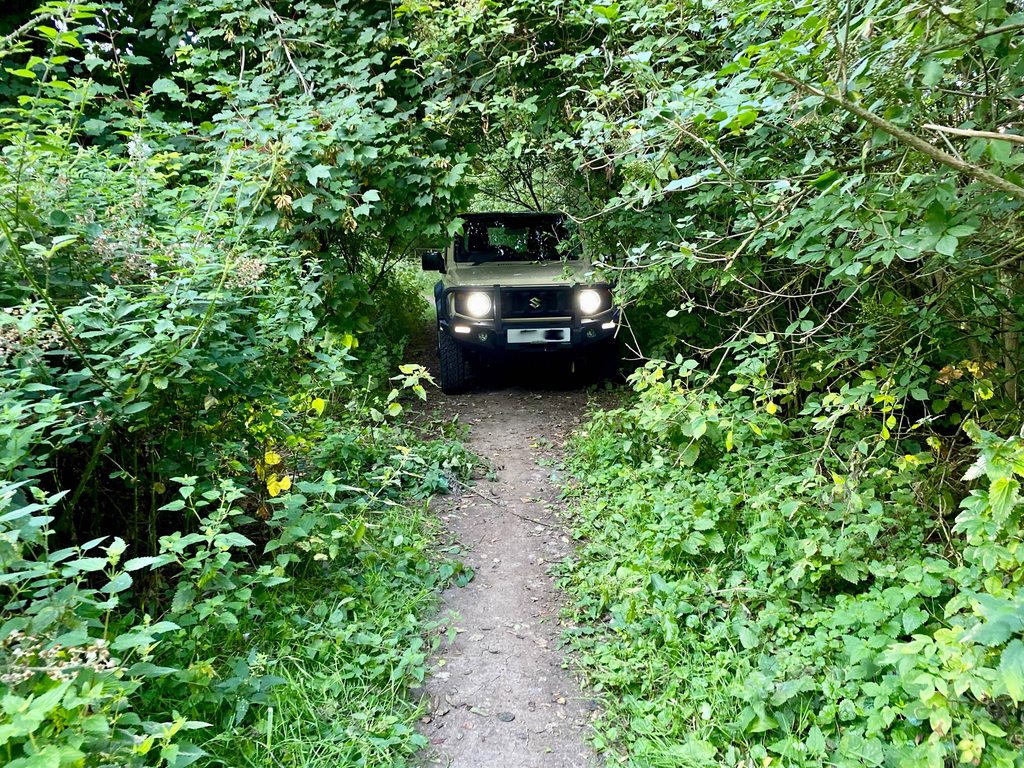 Once through the narrower bits, the track opened up into a nice woodland trail. 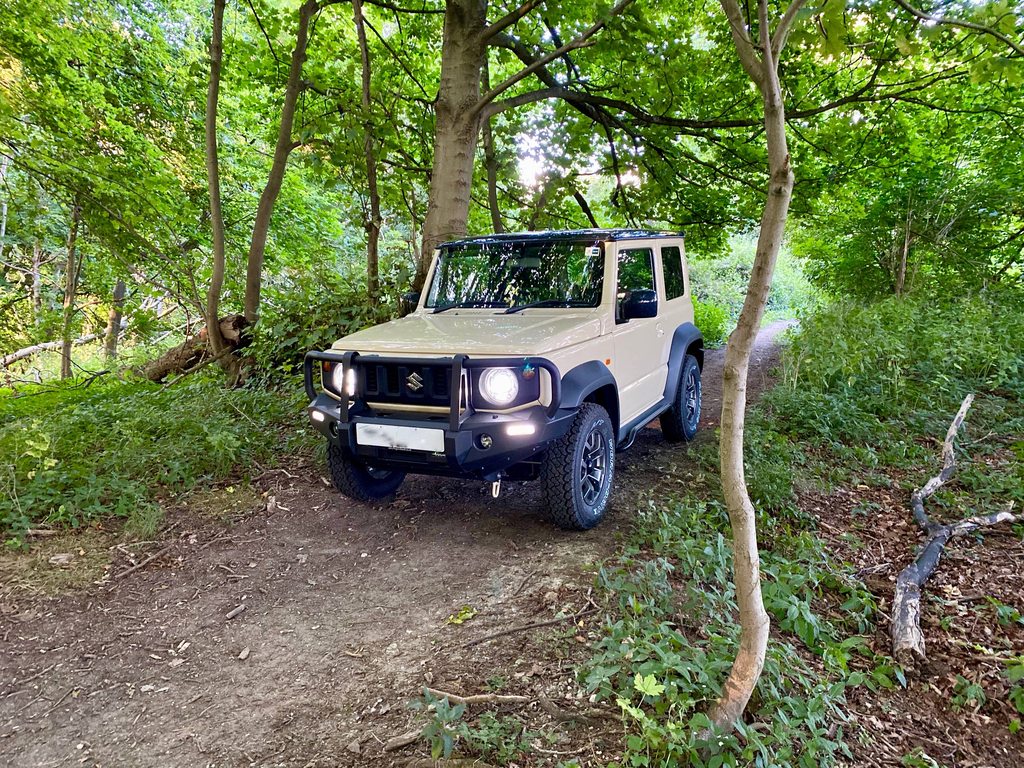 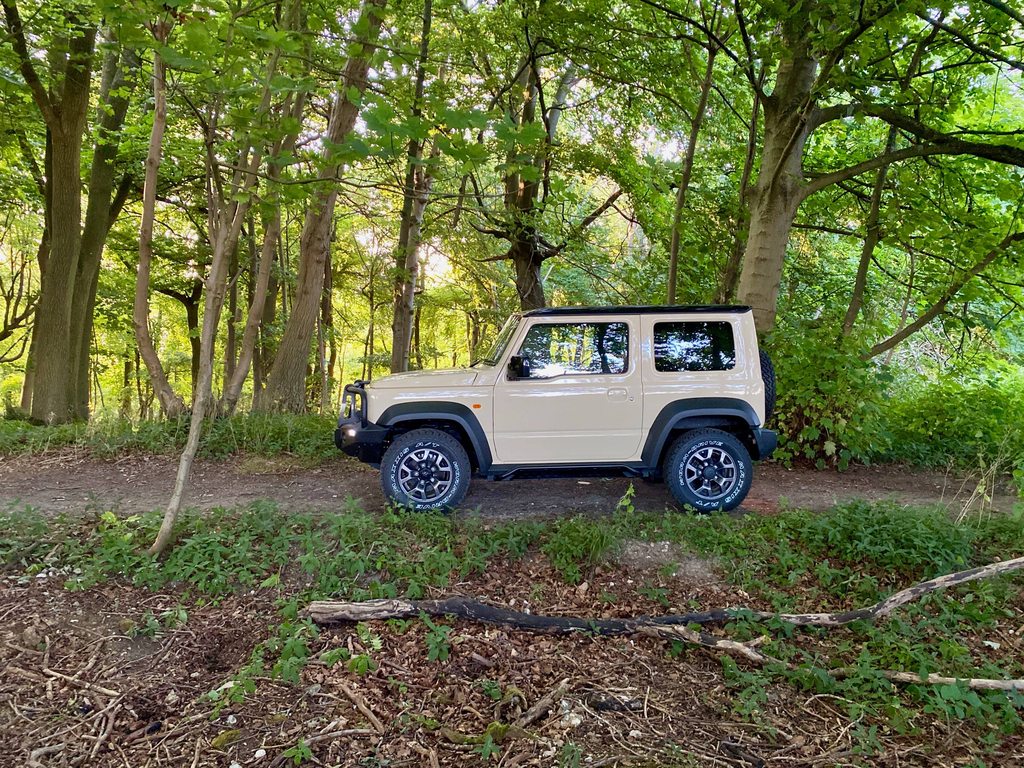 No real need for 4wd or low range on this kind of terrain. Although low range is nice to manoeuvre easily around the tights bits. And of course, when laning, you are there to enjoy yourself, not race to the other end. 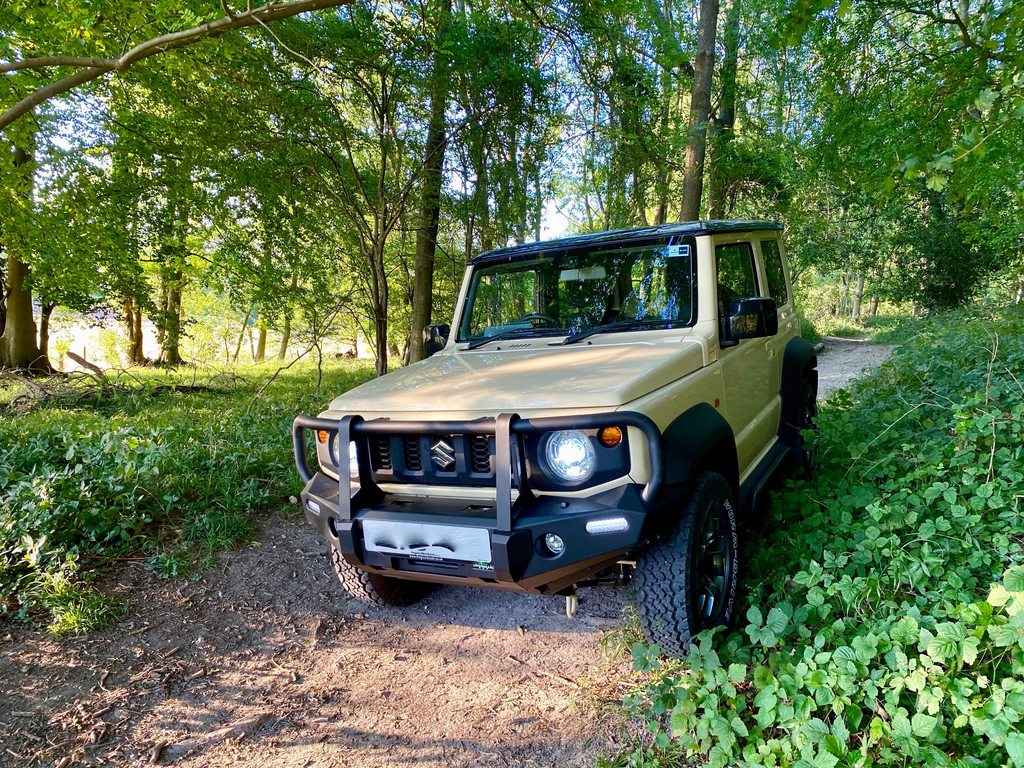 Some rather fantastic views however. 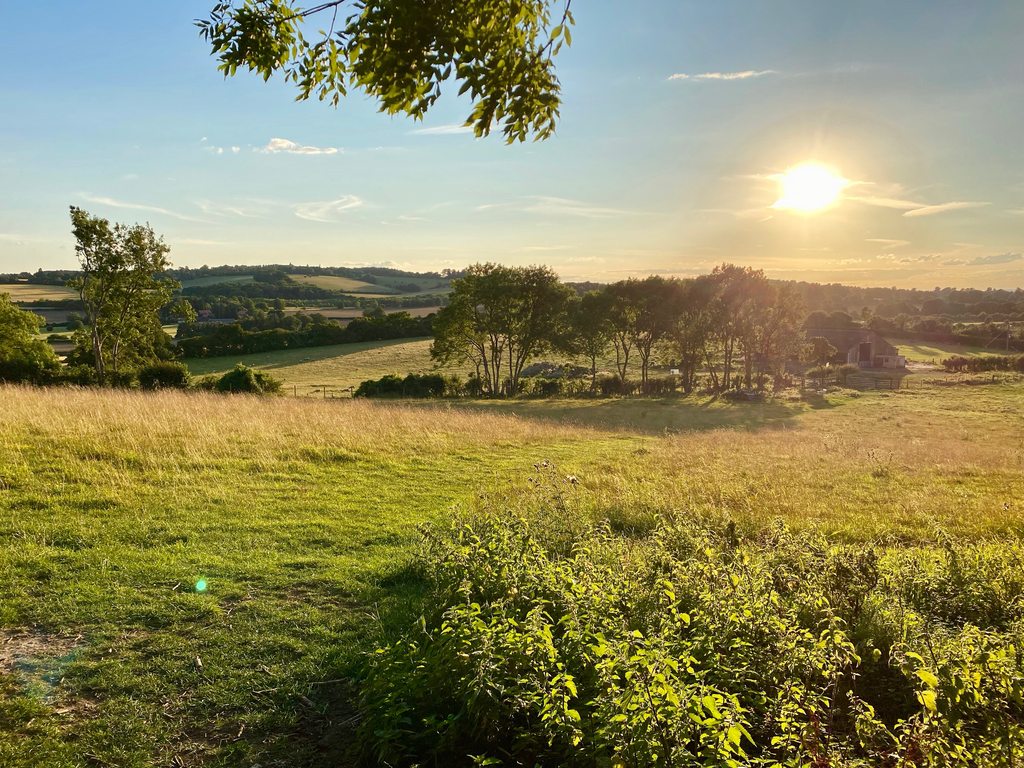 Ive heard people say that your front roo bar is banned in the EU. This is surely not the case is it?? Gotta say, it does look good.

Checknout Billygoatjim on youtube, he is in oz, and goes on some great adventures.

Oh, also, what is the weight of the roo bar buddy??
A wise man once said...... When we are Mean, Shout at People, Lose our Tempers, Swear, and generally act like Tool Bags, Never forget ..... We are all Cavemen in Suits, Uniforms and/or Overalls ..... Living in Semi-Concrete Jungles. Andy - 2019 AD. 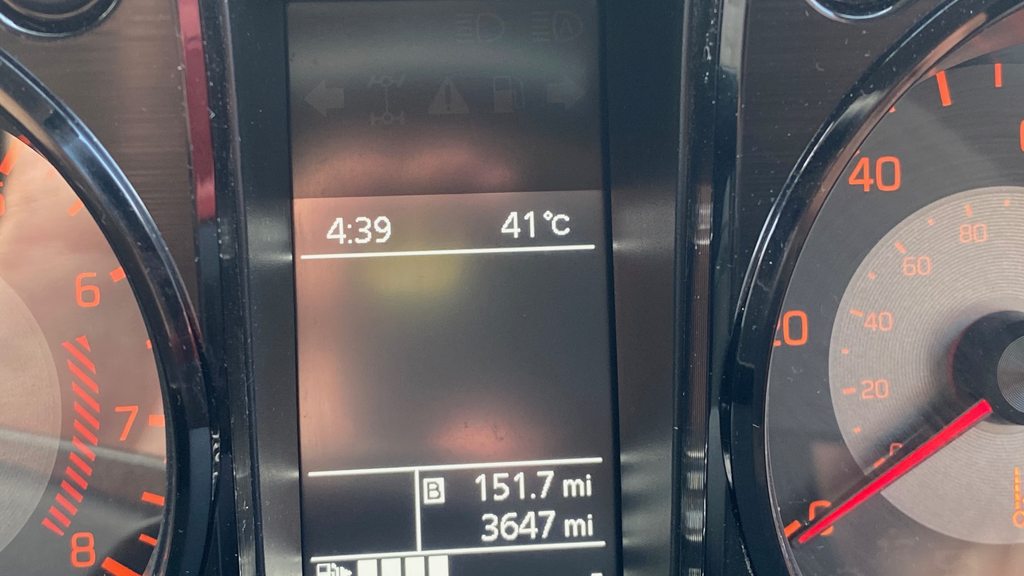 Yesterday also marked the start of harvest for us on the farm. Such an awesome time of year!! 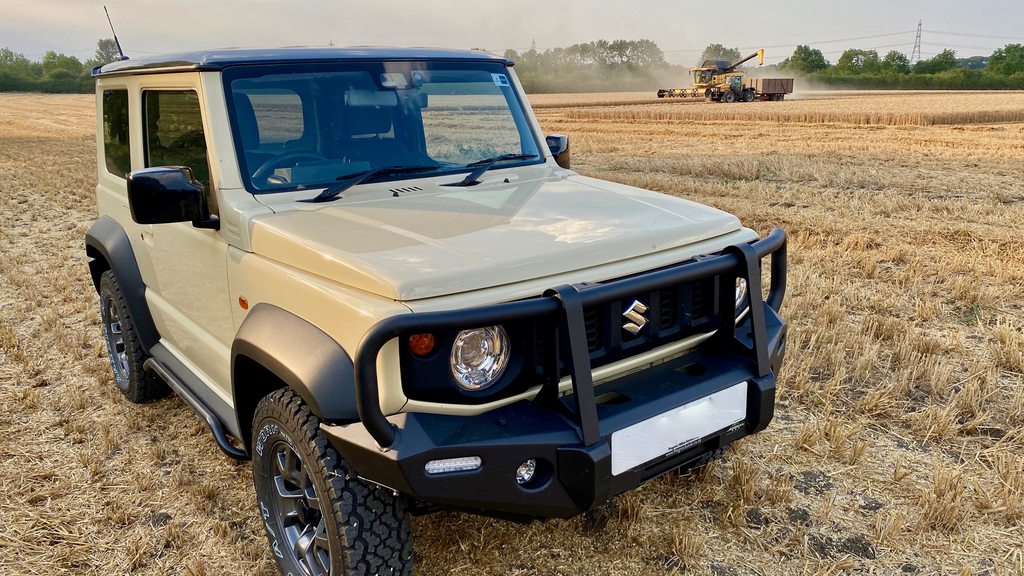 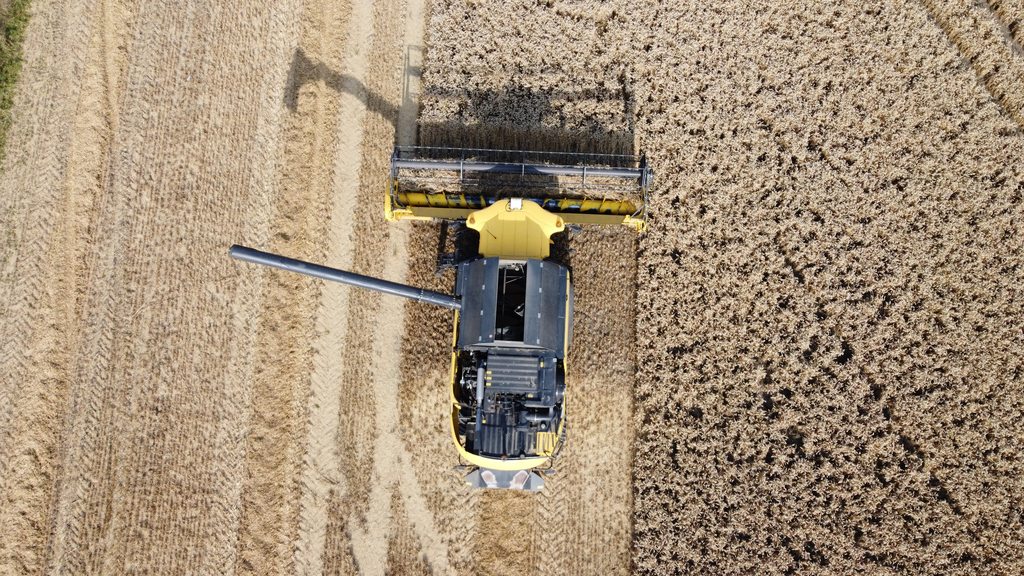 There were some tremendous rainstorms and thunder about. This one knocked the power out in a local village. But thankfully it missed us completely. 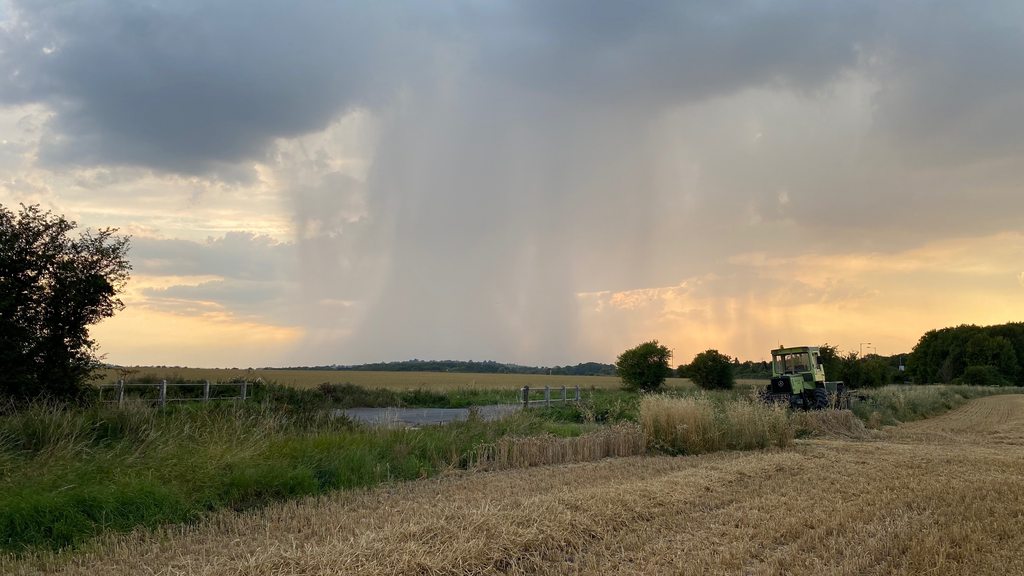 Also had a chance to have a play with my Mavic Mini: