Do the crew still love each other????

Heaven Can Wait
Guest
5928 Hits
We crossed the Canadian, US, border today and are working our way south eastwards to New York.

All has not been sweetness and light among the crew though, tension has been building and we were all getting on one another's nerves. Due probably from being in close quarters for too long.

We were due to stop for the night at Jasper Alberta but when we arrived it was packed with tourists so we decided we would push on a bit further. As we left Jasper, we ended up on the wrong road but didn't realise until we'd been going an hour. The day hadn't gone well and we were all irritable so we needed to find somewhere pretty soon and get something to eat to calm the situation.

We were directed to a lodge out in the middle of nowhere called Tate Juane. When we saw it we couldn't believe our eyes. The lodge and setting was picture perfect, situated on the banks of the Frazer River. The owner, Ted, was a wonderful guy and made us really welcome. As we arrived I noticed a White Water Rafting outfit next door so I thought that to defuse the situation I would take the guys White Water Rafting and to have a break from the day to day routine of driving.

Well the morning rafting session was brilliant and helped, but did not solve the problem. Later that day we were looking to get some food before we continued on to Calgary. I missed the turn off and did a rapid U turn on the main road. Unfortunately our car to car communication was not working so I could not pre-warn them of my intention. I made it, but they didn't. When we got back to them again you should have heard the language! I admitted it was my fault but said do you want to eat here or not? You can just imagine this can't you, everyone getting at each other like children. Just to be awkward they said no, so we ended up driving for another 70 kilometres with tummies rumbling and not talking to one another!

I knew there was more to come as that night we were due to camp. 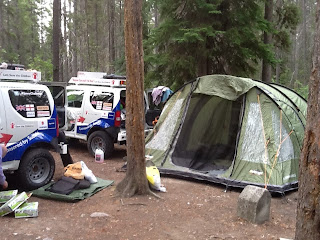 We arrived at the camp site late, everyone was tired and fed up but we had to camp and that was that. We started getting the equipment out from the vehicles in deadly silence. We eventually got the tent up and pumped up the air beds. We were all having a dig at one another and Roger was really on the boil, he decided to go to bed, moaning that he was not going to camp another night, he is going to get a plane home at Calgary. Just as he was cussing us and I was returning the compliment he fell out of bed!! Well that was the last straw. We all fell about laughing and the tension broke. We ended up around the camp fire till late talking the problems though and we were all keen to get on the road and get the job done as a team.

We're all ok now and rearing to go. Les