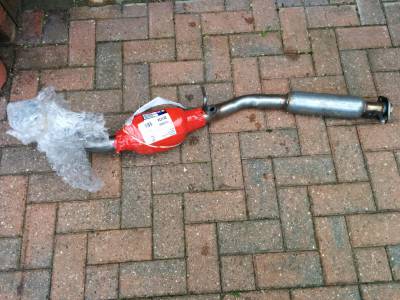 Seems like lots are going wrong with LittleJimny at the moment. A few days ago it started to sound like a Ferrari (well not completely like a Ferrari).

The Cat downpipe had broken in two, right at the Cat body itself. The assembly was entirely rusted out.

So a quick call to the BigJimny shop brought me a new Cat at a special trade price to me! (The store stocks some items on request only).

This work is not for the faint hearted, its not really difficult as there are only 4 bolts holding the pipe in place but they were completely rusted up. As the nuts are "captive" and one promptly sheared and just rotated it became a real struggle to get them out. There was not enough room initially to get an angle grinder in to cut them out so it was out with a Junior Hacksaw and a few hours lying underneath :(

Remember to un-plug the O2 Sensor using the connector at the rear of the engine.

If you are buying a Cat then make sure it comes with the mounting kit, some suppliers offer these separately and you WILL need it. 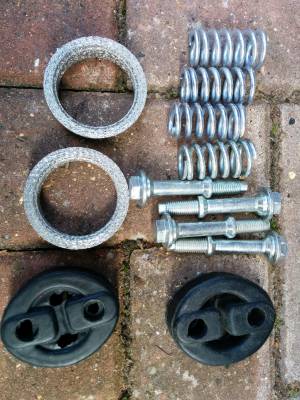 Also you have to transfer over the old O2 Sensor. These have been under the car in all weathers and the Cat runs red-hot in normal use, so you can imagine this nut is not going to be finger tight. I had to cut away the heat shield to get a proper spanner in and then used a handy piece of scaffold to get some leverage on the spanner. Picture below shows access with heat shield removed.

Then you screw it back into the new exhaust. 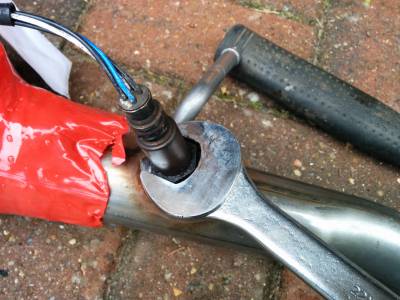 However, this then revealed that the rear box mounts have all but sheared off the exhaust with more rust. The pipes are so rusty that you cannot realistically weld it all up, so now I need to order the rear box and pipes as well :(

Tweet
Tags:
Jimny
19/09/14 - The control every Jimny should have!
New Speakers

Latest visitor to the store

Spotted on M3 slipping to A34 North

What the postman brought....