Brett and Riccy are please to announce the

New JB74 from Brazil (replacement for my 3rd gen)

Less than 2 months ago I made a post  here about my 6 year old 3rd gen Jimny. As I had mentioned on it, a few weeks later my JB74 arrived so I switched rides. My new Jimny is a kinetic yellow (or would it be green?) 4th gen I call Wasabi - it is the auto top trim level in Brazil, with LED height adjustable headlights, cruise control, rearview camera, digital air conditioning and a JBL head unit (the speakers aren't JBL). It doesn't come with other features available overseas such as ACC, lane departure assist, heated seats (this one wouldn't make much sense in Brazil) or curtain airbags.

I've already put it to test on a long (2,600 km travel) to Brazil's central, savannah-like region, reaching the Chapada dos Veadeiros National Park where I tested it off road on some mild difficulty trails. To me it feels as capable as the 3rd gen off road. On road, I'm impressed with the comfort the JB74 provides on long journeys, it hasn't made me tired by the end of the day at all! The engine noise is much less noticeable than in the 3rd gen, specially given its engine doesn't have to rev as high as the M13A to cruise at 100-110 kph. I could notice some whine probably from the transfer box when accelerating/coasting though - from other members' posts it seems to be not so uncommon. Another thing I find worth pointing out is that (maybe because I got used to it?) the increased body roll I noticed during test drive is pretty much gone and the suspension feels much softer on rough terrain without numbing the off road experience. 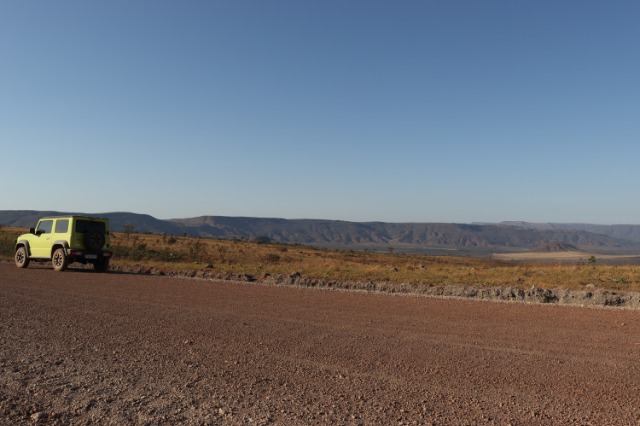 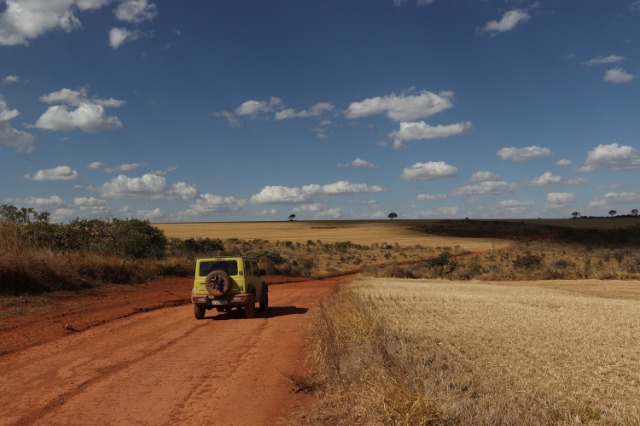 Going around Brazil central region with my JB74. 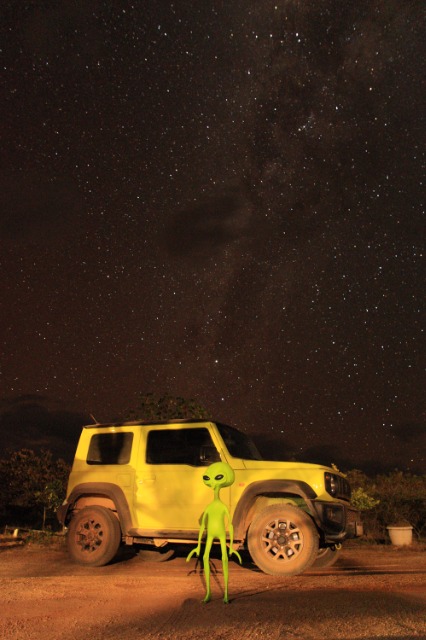 The owner of the campsite where I stayed wanted to have a picture of my JB74 with their alien mascot.

As for mods, I have a lot of plans but I haven't done much yet. The first thing I did after taking the Jimny out of the dealer was to add paint protection film to the front body panels and Clearplex film to the windscreen, as from my experience with the 3rd gen paint chips and windscreen cracks appear sooner or later when driving on Brazilian roads. And soon I might replace the original speakers and add tweeters subwoofer to improve sound quality, as well as soundproof the cabin floor to try to minimize the transfer box whine getting into the cabin. I've been to the dealer already to talk about the whine (which actually isn't so loud in my opinion) but as other members mentioned, they considered it normal and told me even their own JB74s have the same "characteristic". I think maintenance induced failure is a good argument against insisting on doing something about it like having mechanical parts disassembled early into the car's life so I will try to work a solution out with soundproofing.

For future upgrades I intend to make it a micro overlander as others have done, but with minimal, purposeful mods. I don't want to add unnecessary weight or too many comfort items. For example, I have already slept inside the cabin using an inflatable mattress and the comfort is pretty good, so I'm not going for a heavy-bulky rooftop tent. I already have a small fridge and I'm considering installing a dual battery system to supply it plus a small air compressor and a water pump. At some point I might add a winch as some insurance against getting bogged down - after a shovel and maxtraxs -, but I won't add a steel bull bar as it weights a lot, it could easily void insurance coverage in Brazil and it is actually forbidden in Argentina, one of the countries I plan to visit every now and then. As always, the information in here will be extremely useful in my journey with Wasabi!

Less More
12 Sep 2021 04:54 #238497 by Lambert
Replied by Lambert on topic New JB74 from Brazil (replacement for my 3rd gen)
Nice to see one getting some proper use. Can I ask you as a Brazilian, what size tyres was your gen3 supplied with, was it the same 205.70r15 as most of the rest of the world or did they offer them with something different?
Temeraire (2018 quasar grey automatic)
The last of the gen3s, probably.

Less More
12 Sep 2021 12:30 #238516 by PabloAzH
Replied by PabloAzH on topic New JB74 from Brazil (replacement for my 3rd gen)
Hi Lambert, the tyres are the same 205/70/R15 Dunlop Grandtek as the JB74s from abroad. The previous gen was subject to factory mods by the Brazilian branch but the 4th comes nearly untouched from Japan. From what I've heard, just a few parts in the fuel system are replaced to comply with the Brazilian petrol standards (which is actually a mix of about 73% gasoline and 27% sugar cane alcohol).

It's in my plans to get tyres with bigger diameter and width in the future, nothing excessive though. I've heard in a video from Roam Overlanding that 215/75/R15 BFG ATs - my favorite model, but perhaps one of the heaviest - have a noticeable impact on performance. I might get lighter wheels to try to keep the wheels/unsprung mass as low as possible.
The following user(s) said Thank You: Lambert

I liked the Gen3 Brazilian Jimny so much I made a similar bodykit.....M16A solved the lack of power issue. 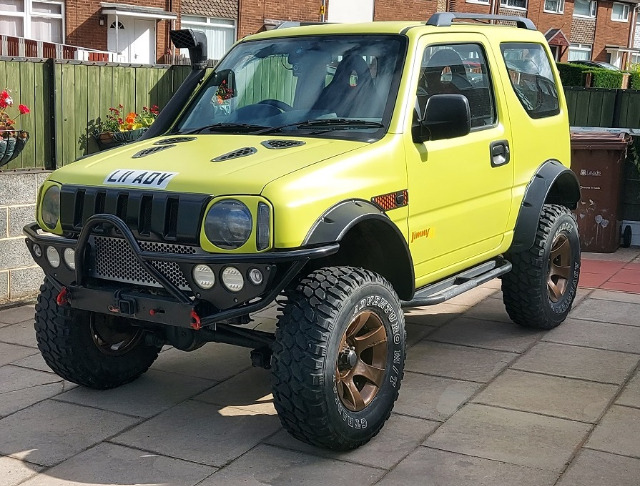 Interested to see what mods you make for it's intended use!

Less More
12 Sep 2021 15:33 #238524 by PabloAzH
Replied by PabloAzH on topic New JB74 from Brazil (replacement for my 3rd gen)
Thanks DrRobin and Keithy! I will add new pictures once I get to travel again.
That's a very distinctive looking 3rd gen Keithy! Has it evolved from the one on your profile pic? I see you had the Brazilian front bumper installed previously.

PabloAzH wrote:
Thanks DrRobin and Keithy! I will add new pictures once I get to travel again.
That's a very distinctive looking 3rd gen Keithy! Has it evolved from the one on your profile pic? I see you had the Brazilian front bumper installed previously.

Yes it's had a few facelifts since I got it

I'm sure I'll change it again at some point!

Less More
12 Sep 2021 19:48 #238530 by lightning
Replied by lightning on topic New JB74 from Brazil (replacement for my 3rd gen)
Superb photos from Brazil. Love your new Jimny, ours is the same colour and gets a lot of attention!