About to buy a Jimny in Japan...

Still has snow tyres on from the Japanese ski season so first thing will be getting another set of rims on with some chunky a/t tyres to give it a bit more presence, and secondly fitting a rear fog light so it can pass its M.O.T!

rear fog fitted, needed wiper blades and then she flew through the MOT. Paid somebody to detail and valet it as was rather dusty from the ship and I am told it looks a million times better. v5c came back after 4 weeks so it also has plates. got a good enough deal on insurance for a japanese import too. and we haven't seen it since we were in japan way back in the winter!

i bought a set of sj steelies off ebay, had them blasted and powder coated gloss black and have some crap tyres on as a temp job until the next phase is completed which will allow us to get some nice ones

that phase being lifting it which is proving mighty tricky to source parts! there is some cross over with the sj80s that were barely sold in europe and98-onwards jimny according to websites in japanese and looking at parts on japan yahoo auctions, but nothing concrete. there are plenty of lift kits available out there but the postage and total cost is insane so hopefully can bastardise something together in the uk be it sourcing springs and shocks sepertely. much research to be done on how i can do this.

we head home in 5 weeks so will get some pictures then.

Less More
29 Sep 2019 19:40 #214025 by fella
Replied by fella on topic About to buy a Jimny in Japan...
i think it may be possible, but until i get home and can do some investigating i wont know for sure. i have been trawling parts numbers and looking at different models to see what crosses over, and some bits will and others dont. i dont quite know how to dechipher the suzuki parts system yet so i am not sure if i am being thick and lots will bolt straight up.

I've been in touch with raptor4x4 who couldn't confirm either way but offer a 30 day refund if its no good so that will be my backup plan. also tried XSHOCKDAKAR as they have dealt with the sj80's which is essentialy the same with the wider track and bigger engine, and they seem to think a bit of faff and welding maybe required.

my search for any others in the country has been in vain thus far. i cant believe i am the first, but pretty cool if i am also!

Less More
29 Sep 2019 20:01 #214027 by jackonlyjack
Replied by jackonlyjack on topic About to buy a Jimny in Japan...
Raymond Edwards (Brighton) aka rhino ray
find him on facebook
He should be able to answer all your questions
My Jimny
www.bigjimny.com/index.php/forum?view=topic&catid=8&id=60814

the 98+ jimny shocks and springs mount differently on the front and ever ever so slightyl different on the rear. ja22w seats the spring onto the front shock as one unit so the shock needs the collar on it. this is the tricker bit to sort as i would need to find a shock that fits as such (unlikely in the uk), i could buy a similar shock and have it welded up to work (getting expensive and risky-ish in terms of my abilites) import from overseas (expensive but simplest as it will definately fit). rear springs mount the same, rear shock is in a marginally different location so need to find the correct length shock.

for eases sake i think importing is the way to go as i am not after a mega lift to go rock crawling, and i want to avoid any modifications should we ever decide to sell it and can return it to stock. just so happens pedders suspension happen to be based out of australia and can import me a set. only kicker is they are designed for the 1.3 engine which does weigh a bit more, but we also do tend to travel a bit and intend to with the jimny so we would normally be loaded up with mountain bikes/skis snowboards and duffel bags full of kit. might not be such an outrageous plan.

looking at parts for trailing arms/panhards/bushes a lot of them come up as multifit for european and japanese jimny models bar occasionally maybe one letter or number in the part number, but this is also true between the three years of different model ja22's that are only differed by limited edition things like a fancier interior or different fogs, so i am convincing myself i can get the aftermarket versions of these sorted in the UK.

in my own head i feel like this has been the most stressful bit to organise as there is limited info available to work with, let alone any in english and its a big investment in parts that cant be returned if they're wrong or not made correctly!

I know i am rambling like i'm in therapy to strangers on the internet but its helping big time!

jackonlyjack
jackonlyjack's Avatar
29 Sep 2019 19:01
About to buy a Jimny in Japan...
Raymond Edwards (Brighton) aka rhino ray
find him on facebook
He should be able to answer all your questions

this was next on my to do list so thank you for the contact, but then as in my post i worked it out! still may need help with traliling arms. etc so he may come in handy yet!
Last edit: 30 Sep 2019 21:13 by fella. Reason: missed the quote

Less More
04 Feb 2020 20:29 #218052 by fella
Replied by fella on topic About to buy a Jimny in Japan...
so we racked up 2500 miles in 6 weeks. having the boost controller in the cab is a dream, can wick it up and down as needed. its amazing the difference a bigger intercooler and the boost controller made. its drinking the air in, still haven't kicked in the fuel cut at full whack so the ecu is doing what the internet said and can handle the extra boost just fine.

we got 5 steelies off ebay for 50quid that we got blasted coated and laquered gloss black. 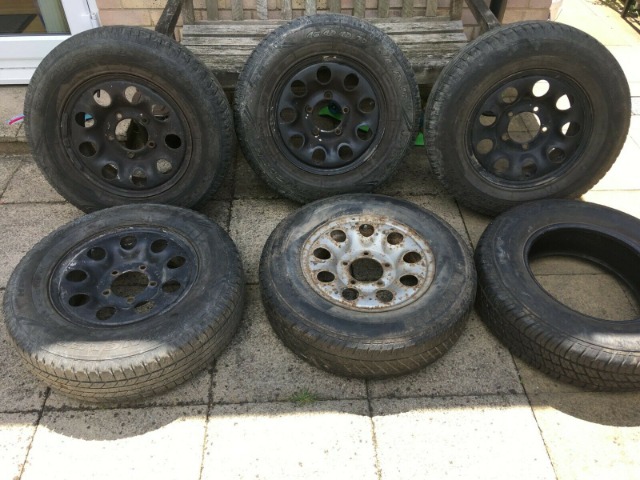 goes nice with the paint, and means we can store the 16's it came on with snow tyres until we get it down to the alps one day. 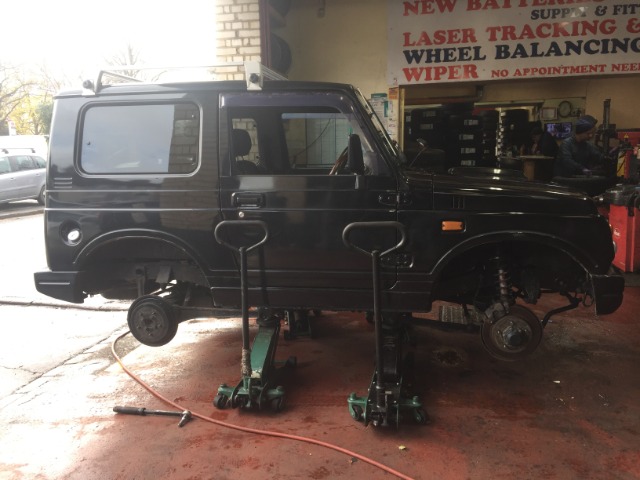 managed to get some geolander a/t tyres with bonus white wall tyres from germany. 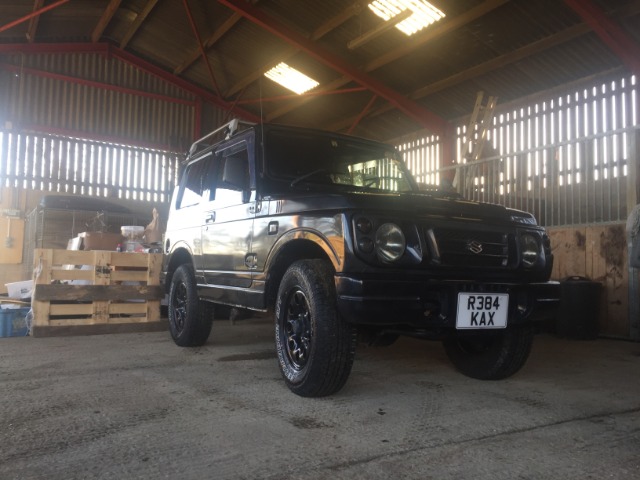 the wife wants it to be useable and look a gangster, so she had all the lenses smoked too. again, i think it looks pretty mint. 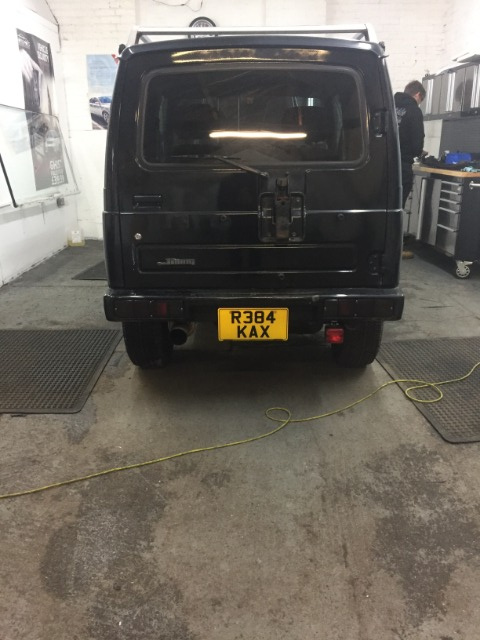 We did a bit of off roading around Yorkshire over Christmas and plowing around in 7" of snow in the dales one weekend and the tyres were great, as well as the car in general.

rust... few more spots i have seen now upon closer inspection. bottom of the rear door coming through, where one of the bumper mounts is on the back, a wheel arch and a patch just above the sill behind the drivers door. the seals on glass are all good, theres not holes anywhere and no water inside so its not getting any worse, but its gonna need some attention. we we're always going to do proper respray and address the rust so not too worried for now.

hadnt realised but the seats all came with a fitted set of leather covers which in Japan cost a bomb so thats a treat, and means the seats underneath are in great condition.

things we may be getting from japan are some floor mats that fit properly so save the carpet a bit. mudguards with the correct brackets, need the bracket and screws for the rear view mirror... and a ht07 turbo as its a direct fit and will be a nice addition.

thats it for now.