× Sell your bits!
NOTE: This is for members and their private sales/wants.
There are rules that suppliers have to follow (and many of you do follow the rules). However there have been a number of instances recently where "suppliers" have broken the rules.

Suppliers include people "breaking for spares" on a regular basis, when purchasing spares members should ask a supplier what they contribute to the running of the forum

Less More
27 Nov 2018 20:00 #198253 by Delux
WANTED! Decent convertible rear hood and silver rear bumper was created by Delux
I bought a convertible and the rear section of the roof has the usual problem. I doubt anyone has a decent one lying about but if you do PM me and we can work out a deal.

I also need a rear bumper in silver. I dont have a paint code but the car is a 2004 Jimny 02 convertible. From peoples avtars, its quite a popular colour combination!

I am able to pay cash on collection or paypal. I can arrange a courier to collect if you are the opposite end of the country.
My pics...
www.flickr.com/photos/159422664@N08/albums

The rear section of hood on my own Jimny is a fairly new one from MONSOON but even that is looking dog-eared at the corners.
Monsoon claim the fit is as good as they get, but I disagree; they haven't got it completely correct because there is too much tension on the bottom corner fasteners, and the fabric they use isn't great.
I've thought about replacing the terrible snap fasteners with some proper Tenax ones but its getting the time to do it.
I have a fastback hood ready to go on so I can get the proper hood off the car and get it repaired.

I'll keep my eyes peeled for you, but I think its a tall order.

IF IT AINT BROKE, KEEP FIXING IT UNTIL IT IS

Less More
28 Nov 2018 00:08 #198261 by Delux
Replied by Delux on topic WANTED! Decent convertible rear hood and silver rear bumper
The monsoon hood looks a better shape than the original from the pics on their website.
I saw the fastback ones on jimnybits. Was quite tempted cos they are cheaper! Let me know how you get on if you fit it.

To be honest, the one on the car doesnt look too bad, I've had to refit worse. There are no tears and it isnt to discoloured.
I have a good technique for refitting these roofs honed thru years of having to refit them when working in Suzuki dealers but if I sell this one on I dont want to have to teach it to the buyer just so they can use the car in the way it was designed!
My pics...
www.flickr.com/photos/159422664@N08/albums

I have a 1979 MG that I owned from when it was just 6 months old, it still has it's original hood, which has now, after almost 40 years, got to the point of needing replacing but is still fully functional. This is testimony to the good materials originally used, the care I have taken whenever folding it, and the general upkeep of stitching and transparencies using black dubbin(!) and Greygates Plastic Polish over the years.

The Monsoon hood isn't too bad to be honest, but by comparison to the MG I think the materials are poor. Decent materials are out there I would gladly have another British Leyland hood on the Midget but the nearest I can find is made by Don Trimming in Birmingham.
I always recall my brother's Jimny O2 (which he had from brand-new) I was appauled at the design and fit of the hood ; it was never a good fit from the outset and the vinyl seemed very hard and inflexible,
The Monsoon vinyl is more flexible but not hard-wearing; it seems cheap quality.
As I understand it, there are two types of Jimny hood, the earlier one has (pointless) zip-out side-panels making it even more problematic. If you have one of those, I think you can convert it to the non-zip-out type from Monsoon but need some different attachment-strips in order to fit it (available from Monsoon).

If your tranparencies are in reasonable condition i.e.not too discoloured, you may be able to get them looking like new by using Greygates Plastic Polish (we used this on plexiglass aircraft canopies for removing small scratches) it's not exactly cheap but goes a long way. It can get a yellowing and opaque looking transperency back from the brink. I use this on my vinyl windows about twice a year to keep them clean and bright, but if you have bad areas you may want to do it more often and you'll eventually get them looking like new. We used to use a thin white 'canopy cloth' which was like a soft thin nylon cloth but I'm sure a microfibre cloth would do.

I'm now not sure about the wisdon of using dubbin on the MG hood - it was the stitching is what I was trying to preserve, but using petroleum based product on plastics probably wasn't the best idea, However the MG hood is probably more brittle from age than from my naiive applications of dubbin.
Renovo make a vinyl protector which is designed for the job, as do Meguiars, so I now use that these days.

I would doubt that Suzuki's hood material would last as long, but here are some pictures of the 39 year MG old hood taken earlier this year... 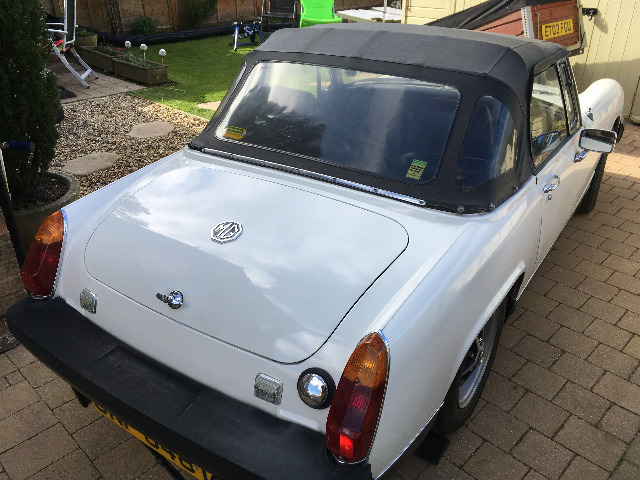 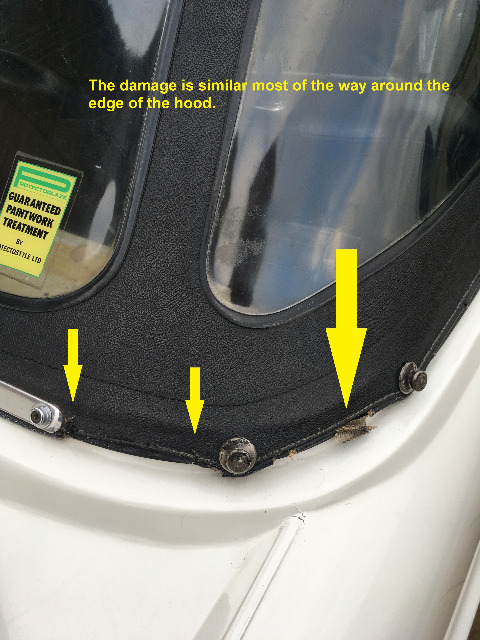 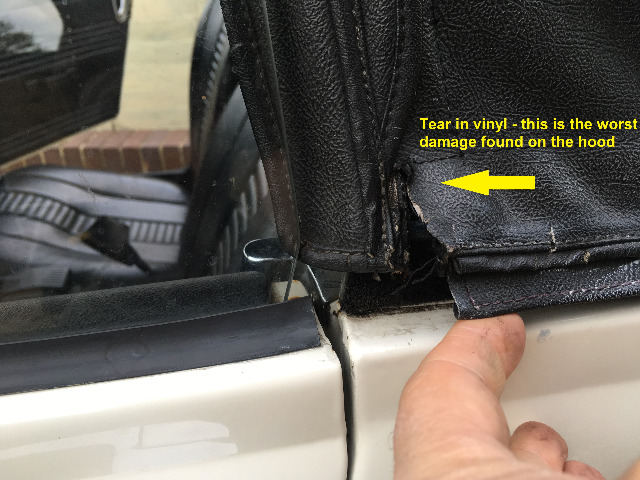 Yes, I'll definitely keep you posted on the fit of the fastback hood (when I get around to doing it!).
It will mean that the rear seats will pretty much be useless for occupants.
If my reckoning is correct, I don't think I will have to remove the supports for the rear seat-belts - they will contact the fastback slightly but shouldnt cause damage - however I will probably glue a patch of vinyl onto the inside of the fastback just to be certain

IF IT AINT BROKE, KEEP FIXING IT UNTIL IT IS