From BigJimny Wiki
Jump to navigation Jump to search

Seen a mistake? Know something that isn't written? Edit and change this article yourself!

Images in the article (if present) can be enlarged by clicking on them.

Bull bar / nudge bar (terminology depends on a world region) is a metal or plastic bar grid, which is mounted on vehicle's front or rear end. This article will use the term "nudge bar".

There are various designs, and most are aftermarket products.

The topic of fitting and using a front nudge bar is loosely associated with the topic of front bumper issues. That wiki article also contains explanations on various Jimny 3 (and 4 in the future) plastic OEM bumper types.

The term "bull bar" is sometimes also applied to aftermarket-made metal "off-roader" front bumpers which entirely replace vehicle's OEM plastic bumper. This article does not deal with such bumpers.

Nudge bars are a popular accessory on many 4WD vehicles, as they are closely associated with vehicle's perceived "ruggedness".

In some regions of the world (like Australia, Africa, Scandinavia etc.) nudge bars actually have utilitarian purpose of defending the vehicle in case of collision with large wild animals, which commonly roam around in those regions. However, in most other cases they are just fashion accessories.

Most nudge bars can be used as mounts for additional driving lamps, and that is very useful for Jimnys 3 and 4, as Jimny 3's and 4's factory plastic bumpers are useless on their own as mounting points for additional lamps.

Contrary to popular belief or impression, most nudge bars are actually undesirable for off road use (in general case). Primary reason is that most nudge bars mount onto the chassis below the bumper. That way, nudge bars actually decrease vehicle's approach/departure angle and ground clearance. This issue is especially prominent in Jimnys 3 with 2nd model front bumper, because that bumper already hangs quite low. A typical nudge bar worsens this to the level of rendering the vehicle almost useless off road.

Some nudge bars, being lower than the bottom of the bumper, also obscure the integrated OEM vehicle towing hooks. Thus they can interfere with the tow strap when attempting to tow the vehicle. This then requires an additional investment on extending the tow hooks somehow.

A nudge bar MUST NOT be used as an anchor when towing or recovering a stuck vehicle!! It will rip off very easily. Most nudge bars also can't handle the weight of an idiot jumping on them.

The main reason for certain legal restrictions for the presence of nudge bars on vehicles is that most nudge bars will adversely impact the fate of anything that collides with them. The other reason is that some nudge bars interfere with the operation of vehicle's air bag deployment system in the case of a collision, putting you and your unknowing passengers at an additional risk.

As far as it is known, the currently valid European Union's directive regarding the use of nudge bars is the EU directive EC 78/2009 (issued in year 2009).

However, it is not known how each EU member country actually adopted it in practice - investigate on your own.

It appears that Britain adopted the EU directive EC 78/2009 as its own House of Commons directive SN-BT-1216.

The EU directive EC 78/2009 essentially dictates that only nudge bars which are certified according to criteria defined in it are allowed to use.

Another useful information resource regarding the use of nudge bars in EU is this web article.

If you have a traffic accident while driving a vehicle which has an illegal nudge bar fitted (no matter if the accident is your fault or not), you could face severe government penalties + lawsuits from other participants in the accident (for example, from a pedestrian or a child's furious parents whose bones your fancy nudge bar broke!) 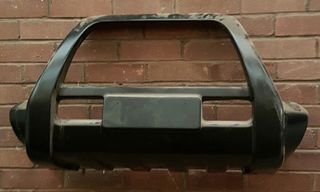 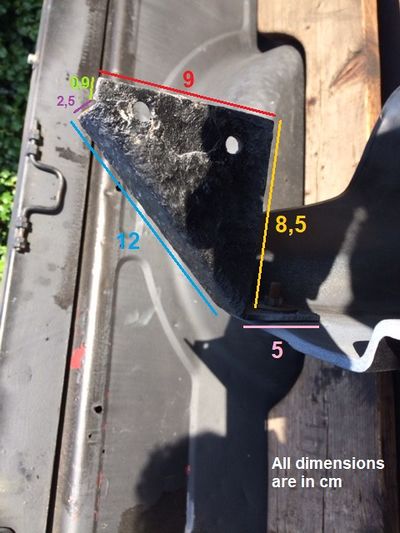 Dimensions of the brackets

There are various designs of aftermarket-made front nudge bars for Jimny 3. Most are made of stainless steel, while some are made of ordinary painted steel.

It is assumed (but not tried) that a certain aftermarket-made nudge bar can only be used with a certain OEM plastic bumper model. The assumption is based on the fact that the vertical length (depth) of 1st model, 2nd model and 3rd model OEM plastic front bumpers differs significantly. So, an aftermarket-made front nudge bar for 1st model OEM front bumper would probably collide with the bottom of the 2nd model OEM front bumper, because that bumper reaches much lower towards the ground than the 1st model front bumper. In the opposite case, the nudge bar would probably fit, but its bottom would hang too low compared to the bumper. 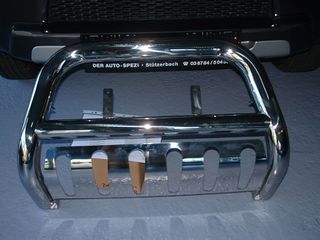 Aftermarket-made front nudge bars for 1st model front bumpers are the most common, as they are the oldest, before the laws and regulations regarding nudge bars were "tightened".

Aftermarket-made front nudge bars for 2nd model front bumpers are not so common, as the laws and regulations regarding nudge bars became "tighter" during this era.

There is currently one known aftermarket manufacturer of nudge bars for 3rd model front bumpers for Jimnys 3. Here is their commercial: 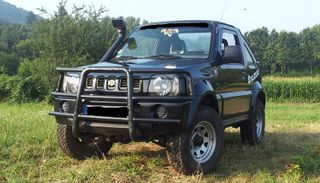 Since all Jimnys 3 use the same rear bumper (exceptions are some Japanese domestic models and some Brazilian models), any rear nudge bar which was made for Jimny 3 should be compatible with any Jimny 3.

As far as it is known, Suzuki has not produced an edition of the rear plastic bumper with an integrated plastic nudge bar.

However, Suzuki did offer a rear nudge bar made of metal tubes, very similar to aftermarket-made models. It was probably one such model which was endorsed by Suzuki. The model offered by Suzuki had a disclaimer in Suzuki's accessories catalogues that it can't be fitted together with a tow bar. 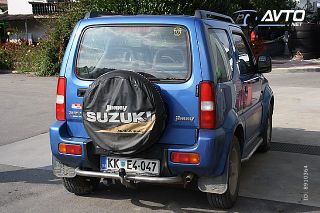 Add pictures of a DIY rear nudge bar here if you have them.