Brett and Riccy are please to announce the

I am pretty sure this will fit your Gen 3 it looks identical to mine, unless Suzuki changed the facia before 2007, I don't think they did?

One other accessory you might like to get is the universal steering wheel controls, these are really needed as the touch display is hard to use when driving.
2011 Blue Jimny SZ3, Xtrons Head Unit, DAB, Front and Rear Cameras, TPMS, K&N, Bosch Aerotwin blades, LED side and interior lights, boot light, parcel shelf, boot box, dash box. Osram Nightbreakers, CTEK Battery Sense. 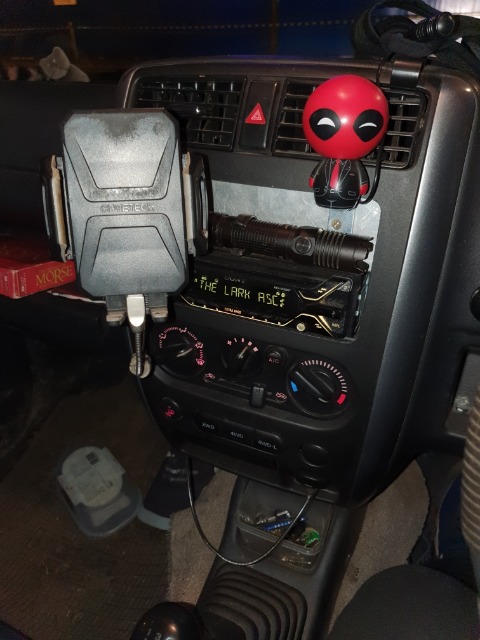 Temeraire (2018 quasar grey automatic)
The last of the gen3s, probably.

Thank you so much for all of that detail!

I have left a question on the Amazon sellers item just to double check it will be suitable for mine. I also asked how much extra the Apple CarPlay would be, not sure if I need this or not? I have an iPhone. Do you have this on yours? If not, how does it work?

sorry for all of the questions but I am absolutely dull with all these sorts of things! Hoping to learn though!

thanks again Robin, you've been a huge help.

Thank you for the photo! That definitely does the job! I need to have a look into all scenarios before picking which one.

No problem with the help Derk, I think the Xtrons head units are great, but let down by a poor manual and support. I have fixed most things by one means or another, but it took a little digging and only too happy to pass on my experiences.

My Jimny set up is fairly extensive, but I had a company car (BMW) with most of this on for the previous 9 years and I didn't really want to loose any of it. Plus I went a bit tech mad.

- Xtrons head unit;
- Xtrons OBD2 dongle and Torque Pro (built in) and SZ Viewer (OBD2 code reset, free, search on here for details of SZ Viewer);
- Reversing Camera & front camera, custom switch box to select fron camera for 7 seconds after reverse camera. There is another input for front camera but it doesn't come on automatically and you have to select it.
- TPMS (Type Pressure Monitoring) USB from eBay;
- DAB (Xtrons dongle)
- USB cable to charge/connect iPhone
- Xtrons [universal] steering wheel controls, very handy.
- Custom switch box to turn the Xtrons on when I unlock the car and switch it off when I lock the car.

The unlock/lock custom switch box was fitted as the Xtrons takes about 40 seconds to fully boot up and I don't really like to wait all that time, so I made and fitted a relay unit in to the central locking so that when the doors are unlocked it switches the Xtrons ignition switch input live and starts booting the radio whilst I am putting my bag in the car, then it is ready to go when I am seated and starting the engine.

My other car is similar but doesn't have a forward camera and has CarPlay.

The Xtrons fitted to my Jimny is Android 8 and does not support Car Play, it does however connect to my iPhone (6 & 11) for handsfree calls as well as for a music player, although you can't get cover flow or select the album, just start and pause or skip tracks.

Just open the Bluetooth app on the Xtrons and pair to your iPhone. You can then download your phone book and use it handsfree. Your iPhone then becomes available to play music from the main interface, the 'launcher' screen.

I didn't like the stock Xtrons Android launcher so replaced it with Car Launcher (Free), this has nice big chunky programmable buttons to select the various apps. The Xtrons launcher might be a lot better on the new version.

The Xtrons I have in my other car is a later version and I did get the CarPlay interface. This gives you the iPhone screen on the Android head unit, but it fiddly to use and was fiddly to setup and get working in the first place, not helped by the poor instructions. My iPhone 6 will only work using a USB cable, although the iPhone 11 might work on Bluetooth. To be honest CarPlay was quite expensive and I have never really used it, you can get hands free and music over Bluetooth without CarPlay and I think Poweramp app and copying your iTunes library to a SD card is much better.

I can't really see the point of using other iPhone apps controlled from the head unit, you might as well get a cradle and use them directly on your iPhone.

Thanks again for all of the details! Sorry I’ve taken so long to reply but I’m going to go for it, the Xtrons IN70JMSL. I’ve also been looking at the DAB dongles and there are 3 types compatible? USBDAB01, USBDAB02 and USBDAB03, which one did you go for please and how does it perform? I also noticed that you left a review on Amazon of the USBDAB01 which wasn’t great.

I had repeated noise problems with the Xtrons head unit fitted to my other car, when the screen was on there was a huge amount of noise in the same frequency band as DAB (200 - 220MHz), so much noise it stopped DAB reception, except where the signal was really strong, like under the transmitter. The problem turned out to be poor earthing on the Xtrons unit, I eventually wrapped copper tape round the case and took an earth strap to the chassis, this fixed the problem.

You might want to look at this thread, specifically the post in this link which shows how I solved the noise problem with copper tape.

I will stress again that this was not on my Jimny, which was an Android 8.1 head unit, but on my other car an Android 9 unit. Android 10 might not have the same problems, but if it does the fix was easy enough. Others have reported a similar problem with other manufacturers units and a couple of people also cured the noise with copper tape.

Now to the Xtrons DAB dongle, one of mine failed after 6 months and since it was during lockdown it had hardly been used. Xtrons refused to replace it, said it only had 3 months warranty. After all of the trouble I had with noise, many emails, I wasn't impressed and Amazon didn't help out either. So bought a cheap DAB USB stick from eBay and that has worked perfectly ever since (almost 10 months), that's why Xtrons got a poor review from me.

They aren't the manufacturer, just re-badge, the head units are good enough, but in my opinion the DAB dongle is not worth the extra money from Xtrons and any cheap DAB dongle from eBay should work just fine. Download and install DAB-z, it's a good player and Zoulou in the XDA-Developers link is the guy who writes it, he is super helpful.

Less More
24 Jan 2021 00:02 #232122 by DerkDiglett
Replied by DerkDiglett on topic Jimny 55 plate CD Player not working
Right, just if anyone is interested I put in the Xtrons all singing all dancing jobby this week (please see attached before and after) I know you guys are no strangers to these sort of things but I have never replaced a car radio before let alone changing it for a non like for like!
The only think I wouldn’t mind asking about this is do I need to install the GPS antenna? If so, does anyone know where best to fit the antenna and then run the lead?

Less More
24 Jan 2021 06:58 #232128 by Lambert
Replied by Lambert on topic Jimny 55 plate CD Player not working
Most decent GPS antenna should be able to get a good signal from inside the dashboard as long as they can see upwards. It's only plastic and glass between them not steel so you don't have to see the wires. Certainly the tracking module I had in my defender was quite happy hiding somewhere in the dashboard and that was nearly 6 odd years ago now.
Temeraire (2018 quasar grey automatic)
The last of the gen3s, probably.
The following user(s) said Thank You: DerkDiglett

Less More
24 Jan 2021 10:04 #232134 by DrRobin
Replied by DrRobin on topic Jimny 55 plate CD Player not working
Looking good Derk, hope it is all working correctly. I put the GPS antenna under the dashboard, close to the top air vents and as Lambert says it’s only plastic and glass.

I did the same in my other car, but then that is a soft top so less metal.

The GPS works very well in my Jimny, always gets about 12 satellites and gets lock very quickly.