Heaven Can Wait
Guest
6081 Hits
They've made it .... Southampton to Vladivostock in 8 weeks and 2 days.  Not a bad effort for the old guys.

Many doubted Les could pull this off, not only has he done it, he's done it in style, through trials and tribulations, good days and tough days.  He's done it all with a smile. We've only heard a small fraction of his tales so far and over the next few weeks while the Jimnys are on the water on their way to Vancouver, we'll hear many more.

WELL DONE LES AND ALL THE CREW!!

I want to also take this opportunity to publicly thank Suzuki .... this is what I wrote this morning to Alun Parry, who has been instrumental in backing Les throughout the Challenge .....

Hi Alun, I know the challenge is only halfway round but I just have to tell you this now ......... We thought all of you at Suzuki UK have been brilliant and have supported this challenge over and above what would normally be expected of a sponsor.  But added to that, the way Suzuki have supported Les across numerous countries all the way to Vladivostock, has just been fantastic, I am amazed at how all the dealerships have got behind the Challenge and supported Les with such enthusiasm.  They are all really a great credit to Suzuki. 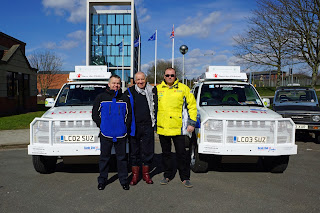